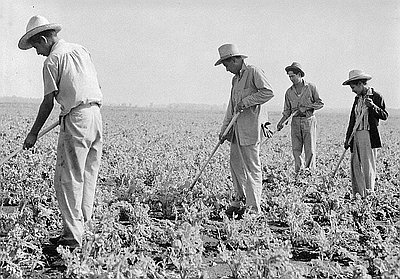 This photograph shows Mexican citizens weeding and thinning in an unidentified sugar beet field in Oregon, probably in Malheur County, during World War II. In 1942, the United States government negotiated with Mexico to import workers in order to alleviate a serious national agricultural labor shortage. The Mexican Farm Labor Program was more commonly known as the Bracero program, translated as “helping hands.” More than 15,000 Mexicans came to Oregon under the program. The government estimated that during the war, Mexican workers thinned 25 percent of Oregon’s sugar beets, and harvested 40 percent. They also harvested asparagus, onions, cucumbers, and peas, and worked in apple and pear orchards.

The Mexican government stipulated terms for hiring braceros including guaranteed wage levels and adequate housing. However, poor oversight in the Pacific Northwest meant that many farmers did not meet those conditions. Most workers lived in dilapidated camps, with poor protection from wind and cold weather, and farmers often paid substandard wages.

In the Pacific Northwest, braceros held strikes for better wages and conditions. However, they received little outside support and were rarely successful in their claims for improvements in their working and living conditions. After the program ended in 1964, Mexican workers continued to cross the border for seasonal, migrant labor, and many immigrated to the United States with their families.