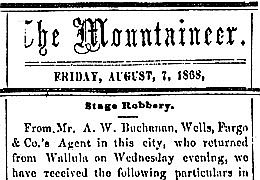 In the summer of 1868, John Hailey's Pioneer Stage Line made three trips daily between Boise City and Umatilla, often hauling Wells Fargo treasure boxes containing thousands of dollars worth of gold from the mines of Idaho and eastern Oregon. Part of the stage route passed over the Blue Mountains southeast of Pendleton. These long stretches of slow uphill travel made the stages vulnerable to armed robbers. This article from The Dalles Mountaineer describes the hold-up of one of Hailey’s stages in August 1868.

According to this initial report, Wells Fargo messenger A.J. Sheppard had “just laid down his gun, and was in the act of striking a match with his boot” when two masked men stepped out in the road and stopped the stage, brandishing double-barreled shotguns. Two more robbers broke open the Wells Fargo treasure box, picked through the mail, and relieved the stage's passengers of their valuables.

However, all was not as it seemed. Seth Austin, the driver of the stage, was acquainted with the bandits, having met them on the road prior to the robbery. Suspecting that they were “getting a livelihood by unlawful means,” he feigned friendship and got them to reveal that they were planning to rob one of the Wells Fargo express stages in early August.

Austin immediately notified the authorities in Umatilla, who decided to lay a trap for the robbers. When the stage arrived in Union Town—present-day Union— the Wells Fargo agent replaced the gold in the treasure box with rocks. The stage continued on its way to Umatilla. Before it had even reached Meacham, however, the four robbers made their unauthorized “roadside withdrawal.” Though they must have been disappointed by the rocks in the Wells Fargo treasure box, they said nothing about it to Sheppard or Austin.

Two of the bandits were arrested in Walla Walla later that month, and five more of the band were arrested in Summerville, a small town in the Grande Ronde Valley. Included among the latter was one of Summerville’s leading citizens, Dr. William LeBurr, the town physician. LeBurr and two of the other ring leaders were sentenced to ten years in the penitentary; most of the rest of the band received five to seven years. Interestingly, after serving his time, “Doc” LeBurr returned to Summerville, where he rebuilt a successful medical practice.

This bird’s-eye view, published by the East Oregonian Publishing Company, shows the town of Pendleton around 1890. Bird’s eye views, also known as panoramic maps, were popular ways of depicting towns and cities in North America during the late nineteenth and early twentieth centuries. They were usually prepared for local …

Due to the mountainous and isolated terrain of southern Oregon, early settlers used boats on the Rogue River to transport themselves and goods from the ocean port at Gold Beach to interior settlements. Gold miner and farmer Elijah Huitt Price established the first mailboat service on the river in 1895 …