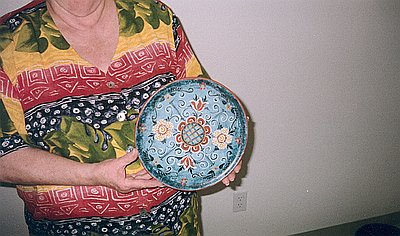 This photographic example of rosemaling by Vesla Harris of Warrenton, Oregon, was taken by Joanne Mulcahy in 1989 during her fieldwork for the Oregon Folklife Program. Rosemaling was originally developed in southern Norway to ornament churches, decorate walls and ceilings, and provide unique embellishments to furniture, boxes, bowls, and plates. Rosemaling is characterized by graceful, flowing lines and fanciful flowers.

Between 1801 and 1845, the population of Norway grew by 50 percent. Because only 3 to 4 percent of the land was tillable and the majority of Norway’s rural population was landless, by the mid-nineteenth century thousands of Norwegians were motivated to emigrate. Between 1820 and 1920, approximately 693,000 Norwegians came to America and settled heavily in the rural areas of Wisconsin, Minnesota, and North Dakota. The most significant urban settlement was in Brooklyn, New York, where the distinctive ethnic enclave catered to the maritime trades in New York’s harbors. In fact, Norwegians eventually played important roles in maritime trades on both coasts and the Great Lakes.

By the 1880s and 1890s, the exhaustion of good land and drought in the Great Plains motivated many Scandinavians to look westward. Scandinavian newspapers, such as Skandinaven, Amerika, Vikingen, and Husbibliothek, published articles, advertisements and letters that described the economic opportunities and mild climate in the West. The Northern Pacific Railroad reached the Puget Sound and Portland in 1883. Ten years later, the Great Northern Railroad arrived in Seattle, and within the next decade, the Chicago, Milwaukee, and St. Paul Railroad provided further access to the Pacific Northwest. Norwegian and other Scandinavian migrants were attracted to the agricultural opportunities in the Willamette Valley and maritime industries in Portland and on the northern Oregon coast. By 1910, 6,843 foreign-born Norwegians lived in Oregon.