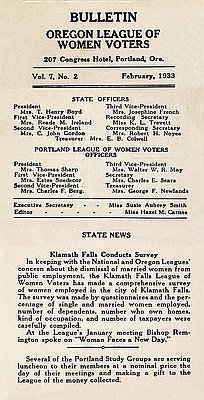 This 1933 article in the Oregon League of Women Voters Bulletin refers to a survey of working women conducted by the League’s Klamath Falls branch. The article does not provide details of the survey results. This document has been edited to highlight the selected article.

In 1932, the government began to fire married women from federal jobs after a clause was written into a Congressional bill dictating that during staff reductions, married women—whose husbands also worked for the government—would be the first employees to be let go. The national and local branches of the League of Women Voters (LWV) opposed the clause and discrimination against married women in the workforce. The clause was repealed in 1937.

During the Depression, many people believed that married women should only be allowed to work in cases of dire financial need. At a time when unemployment was high, some men and women argued that the employment of married women would result in neglected children and the downfall of the American family. Supporters of the rights of married and unmarried women to work argued that employment provided women with economic independence and a way to contribute to society.

The 1930 U.S. Census reported that almost 30,000 married women were employed in Oregon, about twice the number reported in 1920.

This order by the Oregon Industrial Welfare Commission established a sanitary code for workplaces with female employees. The order regulated lighting, ventilation, bathroom and changing room access, and required employers to provide women with places to sit during breaks. It even contained a restriction against “expectoration,” or the spitting of …

As a frontier city, Portland had always had many more adult men than women. The young men were usually unmarried and accustomed to moving from rural to urban work according to the seasons. During the spring and summer, they worked in the woods felling trees and building railroad spurs that …

During the mid-1960s, the State of Oregon Bureau of Labor, under direction from Commissioner of Labor Norman O. Nilsen, conducted a study on the financial and living patterns of working women in Oregon who were economically dependent on their own earnings. A survey distributed in eight major cities questioned self-supporting …

In this excerpt from a biennial report the Oregon Industrial Welfare Commissioners commented on the experiences of Oregon’s female laborers during World War I. Throughout the United States, more than a million women helped to manufacture war products during the war. Secondary industries also hired women to fill positions traditionally held …