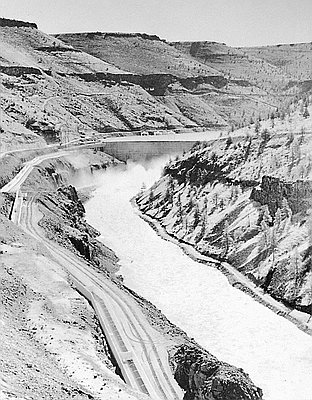 From the first announcement of the plans to build the Pelton Dam in 1949, fishing interests worked hard to stop its construction.   In 1949, they tried, unsuccessfully, to convince Oregon lawmakers to preserve the lower Deschutes and Metolius rivers as dam-free fish sanctuaries.  When that failed, they sought a two-year moratorium on the granting of any state permit to PGE to build the dam—again unsuccessfully.  But, while their attempts to stop the dam fell short, the sustained protest did give PGE cause to sweeten their proposal by addressing two foreseeable problems: fish passage and the widely fluctuating river levels expected from the operation of the Pelton Dam to meet daily peaks in power usage (typical peaks in power usage usually arise during breakfast and dinner hours).  In 1951, PGE agreed to build a $3 million reregulating dam three miles below the Pelton powerhouse to even out flows further downstream, preserving the swift water environment of the lower Deschutes.  At the same time, they made a commitment to address the negative effects their dam complex would have upon anadromous species, initially by agreeing to pay $1 million to the state of Oregon for fish handling facilities, with the promise of $100,000 per year thereafter to support state hatchery efforts to compensate for fish losses.

Fishing interests, unimpressed by PGE’s compromise solution, continued to fight for the cancellation of the Pelton project into 1956, but to no avail.  Construction got underway in April, 1956 and the two dams were finished in May, 1958.  When completed, migrating fish like salmon and steelhead were expected to use a three-mile-long fish ladder, the longest in the world, to pass upstream to Lake Simtustus from the Deschutes River below the reregulating dam.  Unfortunately, the fish passage was not effective.  While adult fish seemed to be able to use the ladders to move upstream, juvenile fish failed to be able to navigate downstream through the swirling currents of Lake Simtustus.  In 1964, PGE completed construction of the Round Butte Dam, seven miles upriver from the Pelton Dam, making survival even more difficult for anadromous fish attempting to migrate past the two projects.  By 1968, PGE determined their fish passage efforts were futile and abandoned the program completely.

This Les Orderman photograph of Wasco Chief Joseph McCorkle symbolically breaking ground for the Pelton Dam was originally published in the Oregon Journal, on May 2, 1956, in conjunction with an article, “Pelton Dam Rite Held,” written by Walt Mattilla.  Work on the dam actually began on April 18, …

This photograph of the proposed site for the Pelton Dam accompanied a January 20, 1949, article in the Oregon Journal. The proposed dam site was within an 800-foot-deep canyon on the Deschutes River just northwest of Madras. Initially proposed by the Northwest Power Supply Company, by January 1950 Portland …