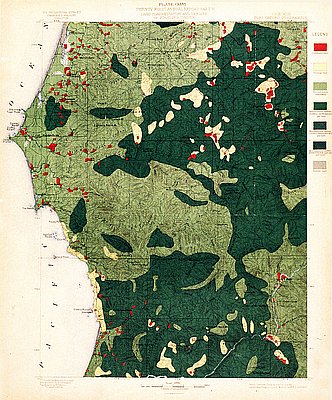 This map was part of the twenty-first annual report of the U.S. Geological Survey (USGS), published in 1900. It shows land classification and timber density in parts of Coos and Curry counties.

During the last decade of the nineteenth century the USGS surveyed large portions of western Oregon in order to appraise the state’s timberlands. They surveyed the Port Orford quadrangle in 1897 and 1898. As can be seen, much of the area was classified as burned (shown in light green with vertical lines), suggesting that fires had recently swept over much of the landscape. These widespread fires were likely caused by a mix of natural and human-caused factors. Lightning-caused fires in this part of the state are not uncommon, but settlers also purposefully lit many fires during the late nineteenth and early twentieth centuries.

Much of the area shown in the map above became part of the Siskiyou National Forest in 1907. One of the national forest’s first foresters, Henry Haefner, noted that many residents of Curry County were “confirmed believers in burning off the country.” Settlers set fire to the land for a number of different reasons. One of the most popular reasons for burning was the enhancement of forage for cattle and game. Haefner noted, for example, that an early settler named Rast, a backwoodsman who made a living hunting and trapping, “believed in burning off the woods to make range for deer and cattle.”

Miners also often set fire to the woods. One old prospector Haefner met proclaimed in the summer of 1912 that “he was going to burn all the country off when it got dry enough to burn good,” probably to make prospecting easier and to ease movement through the woods. Haefner met another elderly prospector who set fires in order to kill rattlesnakes and yellow jackets. And at least one local settler, who Haefner called “M,” hoped that burning off the woods would open the land to settlement, thereby enhancing the area's economy.

After the U.S. Forest Service took over management of Siskiyou National Forest in 1907, they began to strongly discourage locals from burning off the land. Although seriously understaffed, forest rangers worked tirelessly to suppress fires. They also managed to catch a number of locals in the act of setting fires, and several were prosecuted and imprisoned or fined. Many locals resented what they considered Forest Service intrusion into local land management practices. Despite laws against setting fires, some residents of the area continued burning off the land well into the 1910s.

Surveyed Patterns on the Land

Euro-American settlers in the Willamette Valley of the 1830s and 1840s had no instructions to follow in selecting their farmland. They observed that prairie lands required little clearing before they could be tilled, and they knew they needed some timbered land to supply building materials and fuel. Being on or …

With the establishment of the Oregon Territory on August 14, 1848, all grants of claims of land in the territory were nullified. …