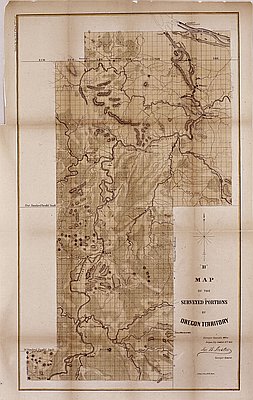 With the establishment of the Oregon Territory on August 14, 1848, all grants of claims of land in the territory were nullified. It was not until the passage of the Donation Land Act on September 27, 1850, that new provisions were made for acquiring unclaimed land, to be based upon government surveys. John B. Preston was appointed first surveyor general of Oregon, where he arrived on April 20, 1851. On June 7, 1851, Preston drove the “starting stake” for the base surveys of the territory at what is today known as the Willamette Stone. The east-west Willamette Base Line and the north-south Willamette Meridian still define surveying and legal land descriptions in Oregon and Washington state.

Preston and his crew were able to carry out their surveying and mapping to the extent depicted on this map in just over one year. Each square of the grid, termed a section, is one mile on each side and includes 640 acres of land—the maximum acreage allowed for a married couple making a claim under the Donation Land Act; a single man could claim up to 320 acres. Thirty-six sections make up a township.

The surveyors took careful note of waterways, hills, prairies, and roads. Some recognizable places are already viable communities, such as Salem and Lafayette; other communities of the period—Champoeg, Fairfield, Cincinnati, for example—have vanished as meaningful places. All three of those were river landings that were affected by floods, channel changes, and the eventual disappearance of river transportation. Notably absent from the map is Mission Bottom or Mission Landing, the by-then-abandoned site of the Methodist mission of the 1830s, and St. Paul on French Prairie. The roads that are mapped include ancient routes such as the California-Oregon Trail, which had sections that paralleled both sides of the valley, as well as newer roads established in recent years. The roads converging on Salem from the outlying farming districts, for instance, reflect its recent importance as a mill town, powered by the waters of Mill Creek.

In 1841, Lt. Charles Wilkes, commander of the U.S. Exploring Expedition, sailed to the Pacific Northwest and began to explore the geographic region known as Oregon Country, which included land that would later be divided into the U.S. states of Idaho, Oregon, and Washington. Wilkes and his crew members, mostly …

This image shows a certificate issued March 8, 1866, that grants 640 acres of land in Clackamas County to Thomas J. Chase and his wife, Nancy. The document cites the Donation Land Act of 1850 as the basis for the United States General Land Office patent. The act, which was …

Territory of Oregon West of the Rocky Mountains

Britain and America jointly occupied the Pacific Northwest from 1812 until 1846, during which time companies from each nation attempted to establish footholds in the regional fur trade. While earlier trade was mostly restricted to bartering between coastal Indians and the crews of European and American sailing ships, fur company …