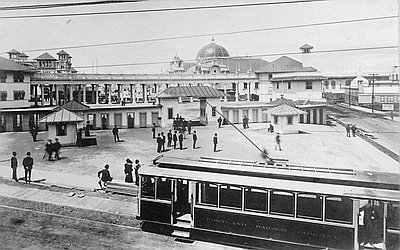 This 1905 photograph shows a Portland Railway Company car at the NW 26th Avenue and NW Upshur Street entrance of the Lewis and Clark Exposition, which was open that year between June 1 and October 15.

Between 1889 and 1906, local and outside investors financed many different electric railway companies in Portland, and helped spur growth into the surrounding suburbs. Initially, as many as ten companies built their own tracks and operated in different, but sometimes overlapping, areas. By 1906, a series of complicated mergers simplified the rail system and resulted in the establishment of the Portland Railway, Light and Power Company (PRL&P), which remained as the only electric rail company inside the city limits. PRL&P, which also sold electricity, was later named Portland General Electric. Other companies, known as interurbans, continued to serve commuters between Portland and surrounding towns.

Electric streetcars began to wane in popularity in the 1920s and Portland’s last streetcars operated in 1950.

Streetcars were an essential element to the success of the 1905 Lewis and Clark Exposition. During the Exposition’s run, more than 100 cars traveled frequently on four different routes to bring millions of passengers to the fair’s location in the present-day northwest industrial district.

Cable cars appeared in Portland in January of 1890.  The first line ran from Irving Street, near Union Station, along 5th to Jefferson Street and along Jefferson past the Vista Bridge into Washington Park (formerly City Park).  It had a sideline from 5th and Alder to Front Street and another …