Proceedings of the Wasco Council, 1855 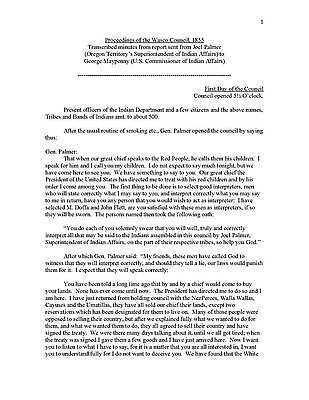 This version of the proceedings of the treaty-making Wasco Council is a reprinted typed transcript of the original report sent to George Maypenny, United States Commissioner of Indian Affairs, from Joel Palmer, Oregon Territory’s Superintendent of Indian Affairs.  The council was held near The Dalles, Oregon, in June of 1855.  The Warm Springs Reservation was created as a result of Congressional ratification, in 1859, of the treaty with the Taih, Wyam, Tenino, and Dock-Spus Bands of the Walla-Walla, and the Dalles, Ki-Gal-Twal-La, and the Dog River Bands of the Wasco.

By 1855, land-hungry American settlers had been streaming into Oregon Country for more than a decade. Their growing presence spurred the United States government to negotiate treaties with the region’s Indian peoples in order to secure legal title to desired lands.  Through treaties, Indian people sold the U.S. government much or all of their ancestral lands and were encouraged to permanently settle on reserved lands within federally designated boundaries—typically chosen by federal officials for their undesirable agricultural potential and lack of white settlement—in exchange for the promise of security from further encroachment or deprivation by Americans.  Additionally, Indian people often reserved off-reservation rights to hunt, gather, and fish in their “usual and accustomed” places “in common with citizens, of the United States.”

Because this is a typed transcript of the original report, it is important to realize that errors may have occurred during its reproduction.

Further Reading:
O’Donnell, Terence. An Arrow in the Earth: General Joel Palmer and the Indians of Oregon. Portland, Oreg., 1991.

While still a young man, Kuckup attended the 1855 Wasco Council, …

On October 7, 1845, Joel Palmer made the first recorded climb on Mount Hood. He wore moccasins that exposed his feet to ice and carried little food. After attempting to lead twenty-three wagons over the south shoulder of the mountain, Palmer lost his way. He climbed to the 9,000-foot level …

Joel Palmer, superintendent of Indian affairs for Oregon, wrote this report to the Commissioner of Indian Affairs on September 11, 1854. It describes a massacre that occurred at the mouth of southwestern Oregon’s Chetco River in February 1854. In the fall of 1853, a settler named A.F. Miller and several …

From 1854 to 1855, Joel Palmer, the superintendent of Indian affairs for Oregon Territory, negotiated nine treaties between Pacific Northwest Indians and the U.S. government. Many Indians agreed to the treaties because they saw it as a way to reserve some of their land.