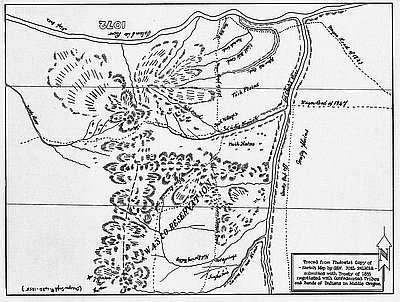 From 1854 to 1855, Joel Palmer, the superintendent of Indian affairs for Oregon Territory, negotiated nine treaties between Pacific Northwest Indians and the U.S. government. Many Indians agreed to the treaties because they saw it as a way to reserve some of their land.

In 1855, the Wasco and Warm Springs Indians agreed to cede to the U.S. government roughly ten million acres of land south of the Columbia River and between the Cascade and Blue Mountain ranges. They received in exchange $200,000 and a variety of government services, including a school, a hospital, and flour and saw mills. The treaty also created the Warm Springs Reservation and reserved for the associated bands of the Wasco and Warm Springs Indians their right to hunt, fish, and gather food on traditional land outside reservation boundaries. The U.S. government moved members of northern Paiute band, in southeastern Oregon, to the Warm Springs reservation in the 1880s.

Further Reading:
Boyd, Robert. People of the Dalles: The Indians of the Wascopam Mission. Lincoln, Nebr., 1996.

O’Donnell, Terence. An Arrow in the Earth: General Joel Palmer and the Indians of Oregon. Portland, Oreg., 1991.

While still a young man, Kuckup attended the 1855 Wasco Council, …

On October 7, 1845, Joel Palmer made the first recorded climb on Mount Hood. He wore moccasins that exposed his feet to ice and carried little food. After attempting to lead twenty-three wagons over the south shoulder of the mountain, Palmer lost his way. He climbed to the 9,000-foot level …

Proceedings of the Wasco Council, 1855

This version of the proceedings of the treaty-making Wasco Council is a reprinted typed transcript of the original report sent to George Maypenny, United States Commissioner of Indian Affairs, from Joel Palmer, Oregon Territory’s Superintendent of Indian Affairs.  The council was held near The Dalles, Oregon, in June of 1855.  The Warm Springs …