Program for Portland Day at the Fair 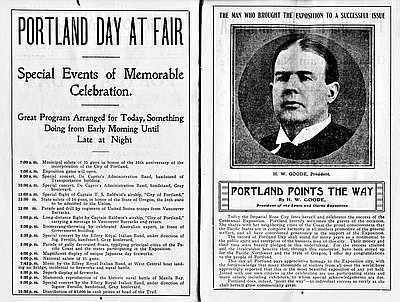 This Sept. 30, 1905, program is from “Portland Day” at the Lewis and Clark Centennial and American Pacific Exposition and Oriental Fair. Shown here are the middle pages from the program, which gave the schedule of events and commemorated Henry W. Goode, the president of the Exposition Company. “Portland Points the Way” was the logo for the day. Programs were issued daily during the Exposition, which was open from June 1 to October 15.

Exposition promoters attempted to attract a record number of people on Portland Day by planning special events, asking businesses to close that day, and urging city residents to show their civic pride by attending the fair. Oregon Governor George E. Chamberlain proclaimed Portland Day a state holiday, and asked that state residents “lay aside their ordinary vocations” and go to the fair for the “greater advancement of the magnificent commonwealth in which we live.” People with free entrance passes—including journalists, special guests, and others—were discouraged from using them that day and asked instead to pay full admission. As a reflection of Portland boosterism, some residents made an extra effort to inflate entrance numbers. The Oregonian reported that some “Portland business men (were) paying their way into the Fair again and again so as to help swell the paid admissions.”  While fair organizers did not meet their goal of 100,000 entrants, the Oregonian reported that more than 85,000 tickets were sold.