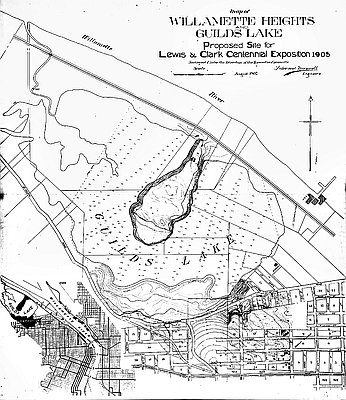 This 1902 survey map, of what is now the City of Portland’s northwest industrial district, shows how the Guild’s Lake area looked before it was used as a site for the 1905 Lewis & Clark Centennial Exposition and Oriental Fair. Portland’s wealthy merchants planned the exposition to promote the city to potential investors, immigrants, and tourists. Attracting almost 1.6 million people between June 1 and October 15, 1905, the fair commemorated the cross-country Expedition led by Meriwether Lewis and William Clark in 1804–1806. This map was drawn by engineer William Maxwell.

Using a plan by landscape architect John Olmsted, Maxwell and fellow engineer Oskar Huber worked to transform the shallow, swampy Guild’s Lake area into an elaborate fairground. They leveled the ground, installed a plumbing system, and set up a way to pump twenty million gallons of Willamette River water into Guild’s Lake daily during the fair. Contractors built large temporary buildings, most of them constructed with wood frames, wire mesh, and plaster. The Forestry Building, constructed with more than three hundred Douglas-fir trees, survived the fair but was destroyed by a fire in 1964.