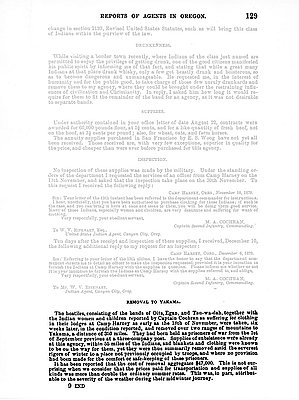 This excerpt is from a report written on August 15, 1879, by W.V. Rinehart, agent for the Malheur Indian Reservation. It describes the removal of Paiute Indians from the Harney Basin to Washington Territory’s Yakama Indian Reservation.

Conflict between settlers and Indians in southeastern Oregon and southern Idaho came to a head in the spring of 1878, when Paiutes from southeastern Oregon’s Malheur Reservation joined Bannock Indians from Idaho in an uprising against white settlers. Although short-lived, the Bannock War led to the dissolution of the Malheur Reservation and years of suffering for its former inhabitants.

After the end of the war in the fall of 1878, the U.S. Army brought Paiute Indians from southeastern Oregon to Camp Harney, located about fifteen miles east of present-day Burns. In December of that year, the camp commander told Sarah Winnemucca, a Paiute interpreter and activist, that he had orders to remove the Paiute to the Yakama Indian Reservation 350 miles to the north. In her autobiography, Sarah wrote that she was struck with horror. “What, in this cold winter and in all this snow,” she responded, “and my people have so many little children? Why they will die.”

Approximately 550 Paiute men, women, and children—many of whom, as Rinehart notes in the report above, had not engaged in hostilities—traveled north for nearly a month through the snow and over two mountain ranges. The women and children traveled in wagons, but some of the men were forced to march in leg irons. Five children, one woman, and an elderly man died along the way, their bodies left alongside the road since it was too cold to bury them. In the report reproduced above, Rinehart complains about the exorbitant cost of the winter removal and notes that the Paiute were forced to leave Camp Harney under-equipped even though supplies were en route from the Malheur agency. Yakama Agent James Wilbur remarked that the newly arrived Paiute were “utterly destitute” and that he was given no notice of their coming “and of course no arrangements for giving them rations.”

The Paiute spent five years on the Yakama Reservation. Historian Sally Zanjani estimates that more than one-fifth of them died during their exile, malnourishment and disease probably accounting for most of the deaths. The Paiute were finally allowed to leave the Yakama Reservation in 1883. Some moved to the Warm Springs Reservation or to Nevada, while others returned to the Harney Basin, where they established a small community near present-day Burns.

This photograph of Myrtle Peck teaching the Paiute’s language and traditional stories to her children was taken by Leila Childs in 1997. At the time, the Pecks were participating in the Traditional Arts Apprenticeship Program of the Oregon Historical Society Folklife Program.

As far back as Myrtle Peck can remember, her mother …