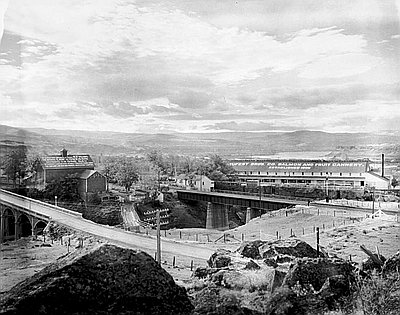 This photograph, believed taken by Benjamin Gifford around 1928, shows the Seufert Brothers Company Salmon and Fruit Cannery in The Dalles. At the left of the photo is a sign painted by Francis A. Seufert (1853-1929) on the roof of his horse barn in response to an initiative that banned fishwheels on the Oregon side of the Columbia River. The sign reads: “To build this business it took 47 years. The initiative law of Oregon destroyed it in one day. Sponsored by the Oregon State Grange and Federated Trades Union. The Oregon law does not protect invested capital.”

Fishwheels became controversial structures almost immediately upon their introduction to the Columbia River in 1879. Like their east coast predecessors, Columbia River fishwheels used the current to turn a large wheel that scooped salmon and other migrating fish out of the water and deposited them in a container. They required few men to operate, and though many were not particularly productive, some fishwheels could harvest an enormous number of fish. The most productive wheel on the river, Seuferts’ No. 5, averaged about 73 tons of salmon per season.

By the turn of the century at least seventy-six fishwheels were in operation on the Columbia, most concentrated at the Cascades and in The Dalles-Celilo area. In 1908 gillnetters from the lower river organized an initiative drive to ban fishwheels and other forms of commercial fishing in the Columbia River above tidewater. The upper-river fishwheel owners responded by submitting their own initiative that severely limited fishing in the lower river. Both initiatives passed, effectively closing commercial fishing on the Oregon side of the Columbia River. The legislature soon overturned both laws.