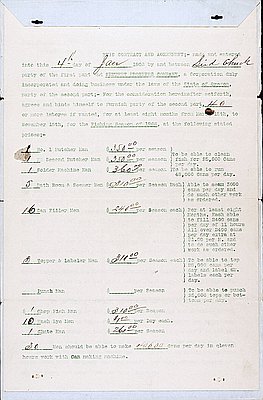 George Hume brought the first Chinese workers to Columbia River salmon canneries in 1872. Two years later the Weekly Astorian noted that Chinese workers made up the “chief reliable form of help” at Columbia River canneries. In order to recruit a reliable work force, canneries generally contracted with Chinese labor bosses, who then arranged to fill the individual positions specified in the contract. The contract above is for approximately forty men to work from March 15 to November 15 for between $240 and $360 for the season. The crew also received board for $6.50 per month, a $100 seasonal allowance for food, a round-trip train ticket from Portland, and an acre of land near the cannery on which to grow vegetables. In 1908 cannery workers worked for eleven hours a day, six days a week. By the 1920s the workday was shortened to ten hours a day, and by the 1930s it fell to eight hours a day.

Francis Seufert, the grandson of one of the founders of the Seufert Brothers Company, remarked that “Chinese crews were dependable, and hard workers, and once you signed a labor contract for your China crew, that worry was over for the season.” He noted that the Chinese labor contractors set the terms of the contract. “You might argue about various Chinese labor costs, but when it was all over the China boss’ ideas would prevail.”

Some scholars have argued that the labor contracting system was exploitative. Anthropologist Courtland Smith, for example, suggests that contractors and canners benefited from the contract labor system at the expense of the workers. In addition to charging fees for organizing the work force, contractors also sold clothing and other items to workers at exorbitant prices, including, Smith notes, drugs such as opium, which he says “were used both to lure and control workers.” Contractors also often made profits from the gambling activities that Chinese workers engaged in after work.

Francis Seufert claimed, however, that the contracting system did not exploit Chinese workers. Despite common perceptions, Seufert argued, “Chinese cannery labor was not cheap labor. The Chinamen working in a salmon cannery received the same wages as men working outside the cannery—the fishwheel workers and the fish house workers,” all of whom were white.

This photograph, believed taken by Benjamin Gifford around 1928, shows the Seufert Brothers Company Salmon and Fruit Cannery in The Dalles. At the left of the photo is a sign painted by Francis A. Seufert (1853-1929) on the roof of his horse barn in response to an initiative that banned …