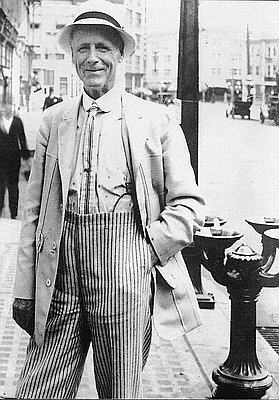 Benson was an inventive lumberman, concerned with efficiency. At his lumber company, Benson replaced oxen, used to drag timber, with railroad engines made of salvaged parts thereby reducing both labor costs and saving time.  When Benson decided to send his logs directly to San Diego, he designed log rafts, 835-feet in length, in order to avoid what he considered exorbitant freight rates. A wise decision—Benson’s company saved $150,000 dollars a year with this alteration in business standards.

Benson also felt strongly about the state’s need to invest in good roads to accommodate the growing number of automobiles.   Benson’s practicality was teamed with his desire to preserve the Columbia Gorge and at the same time make its beauty more accessible.  As a result of the combined efforts of Benson and some like-minded friends on both the Oregon and Washington sides of the Columbia River, the scenic Columbia River Highway was opened in 1915.  In order to prevent commercial development in the area, Benson purchased land near Multnomah Falls and Wahkeena Falls for use as public parks.

In 1917, as a result of his strenuous efforts to pass a six million-dollar bond issue for roads, he was named the first chairman of the reconstituted Oregon State Highway Commission.  Benson’s legacy lives on in Portland with the once derelict 100-year-old Benson family home renovated and moved in 2000 to the campus of Portland State University.  Outside the stately home stands another Benson legacy:  a Benson fountain that continues to splash fresh water for passers-by to enjoy.

In 1891, lumberman Simon Benson bought $6000 worth of used iron and built a railway into his Washington timberland. Over the next 18 years, Benson changed Pacific Northwest logging by introducing steam power and ocean-going log rafts. With his new technology, Benson developed a large lumber operation spread …