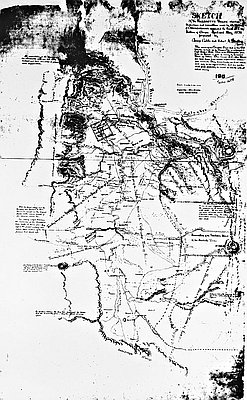 Oregon became a United States territory in 1848, and the rapid growth of Euro American settlement in the Willamette Valley increased tension between the immigrants and the valley’s original settlers, the Kalapuyan Indians. Kalapuyans included more than a dozen different bands of people who had hunted, foraged, and lived in the area for thousands of years before the explorers, fur traders, missionaries, and settlers arrived in the nineteenth century. Many Kalapuyans died when foreign pathogens, including smallpox and malaria, were introduced to the region through trading networks and emigration. The remaining bands continued to occupy and use thier homelands in the face of pressure from immigrants who desired it for their farms and settlements.

The U.S. Government, which recognized Kalapuyan ownership, negotiated to purchase their land after Congress passed the 1850 Oregon Indian Act. Settlers and government officials wanted the valley natives to move to the east side of the Cascade Mountains, but the Indians refused to leave their homeland entirely. In 1851, a government board of commissioners negotiated a treaty with the Kalapuyans that allowed for the purchase of most of their land and left several small reservations on the mountainous edges of the Willamette Valley. Congress did not ratify that treaty. In 1857, by Executive Order, the Grand Ronde Reservation was established on the east flank of the Coast Mountain range.

This map was drawn by George Gibbs, a geologist and ethnologist, and Edmond A. Starling, a federally appointed Indian agent in the Oregon Territory. Its purpose was to mark land purchases and reservations negotiated by the Board of Commissioners with Native Americans in Oregon. Gibbs and Starling based sections of their map on Lt. Charles Wilkes 1841 map, as part of the U.S. Exploring Expedition, and on a navigational chart of the Willamette River by Captain Leonard White, an accomplished riverboat pilot. Gibbs and Starling also enlisted the help of Native Americans to identify and properly locate landmarks, river routes, and territorial boundaries.

The key in the upper right corner reads: "Sketch of the Wallamette Valley, showing the purchases and reservations made by the Board of Commissioners, appointed to treat with the Indians of Oregon. April and May 1851, prepared by George Gibbs and Edmd A. Starling. The course of the Columbia River and of the Wallamette, as high up as Oregon City, is enlarged from Capt. Wilkes' map. That of the Wallamette from the Falls to Salem, is from a survey by Leonard White of Salem. The courses of the other stretches are laid down from verbal information obtained from residents. They, accordingly, are to be considered only as an approximation, but are for the most part, probably as correct as can be without an actual survey."

The original map is held by the National Archives.

Lithograph, Valley of the Willamette River

David J. Schnebly was the editor of the Oregon Spectator, the first newspaper published in Oregon Country (1846). His editorial reflects some issues and values of early Willamette Valley immigrants. Euro Americans began arriving in Oregon Country in large numbers during the early 1840s, attracted in part by exaggerated …