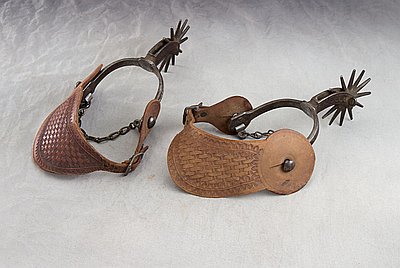 The spurs shown in the photograph above were probably made in the late nineteenth century. They are currently on display in the award-winning “Oregon My Oregon” exhibit at the Oregon Historical Society.

The history of spurs goes back thousands of years. Ancient and early medieval spurs had a single protruding point called a prick that was used to goad a horse into action by poking its sensitive belly. By the late Middle Ages the prick spur had been supplanted in western Europe by a new kind of spur called the rowel spur. Instead of single immovable prick, the rowel spur has a rotating spiked wheel called a rowel. Both types of spurs were among the emblems of knighthood in medieval Europe.

Spanish conquistadores are often credited with introducing spurs to the Americas. The conquistadors’ spurs, known as the espuela grande, or “great spur,” were typified by very large rowels. These distinctive spurs are still in use in many parts of Latin America.

Like many elements of cowboy culture, spurs were brought to the western United States by Mexican vaqueros in the mid-nineteenth century. The Mexican, or Vaquero, spur evolved into several different types in the United States during the late nineteenth and early twentieth centuries. The spurs shown in the photograph above are in the California style. Unlike Texas spurs, the shanks and heel bands in California spurs are separate pieces. This two-piece construction is the most distinctive feature of the California style. California spurs probably came to Oregon with the first Californio vaqueros in the mid-nineteenth century.

While some spurs are highly ornate, the spurs shown above are starkly utilitarian. They were made to be used, not displayed. They have twelve-point spoke rowels that are attached to a drop shank, which in turn is connected to a very simple straight heel band with unadorned stationary buttons. Attached to the heel band are tie downs, chains that went under the boot. Though most California spurs have chap guards, these do not. The spurs themselves are made of hand-wrought steel while the straps are made of leather embossed with a simple geometric design. The leathers are probably not original as they have seen little wear.

Spur-making developed into a fine art in the late nineteenth century. Many cowboys had skilled craftsmen make them customized, highly ornate spurs inlaid with precious metals. Such spurs have become family heirlooms and are often passed down through the generations.

This photograph, taken by Barry Peril in 1995, shows Norma Mendoza (right) looking on as Maria Guadalupe Barajas (left) demonstrates a sewing technique used to decorate a traditional charro sombrero.  The two women worked together through the Traditional Arts Apprenticeship Program of the Oregon Historical Society Folklife Program in 1994. …

This photograph of John Sharp posing in front of his Prineville home was taken by Folklife coordinator Leila Childs on June 9, 2000.  At the time, Sharp was training Dory Howell (not pictured) how to “gentle and train” wild horses as part of the Traditional Arts Apprenticeship Program of the …