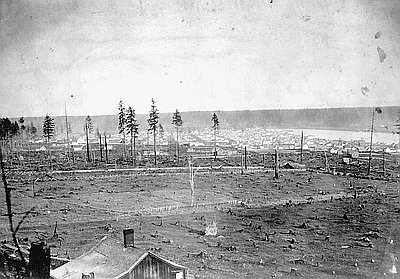 In this 1857 picture, tree stumps are apparent just at the edge of town. In 1847, a visitor to Portland remarked that the trees had been cut down where the streets had already been surveyed, but the stumps remained. There was much to be done in building a new town, however, and stump removal was a chore that could wait for later. In the meantime, Portlanders and visitors to the area had to skirt logs and climb over brush to avoid soiling their boots in the mud and water, if they even cared.

New claims were being filed apace on the outskirts of Portland and across the river in East Portland as well. The future of these new speculative claims lay in the successes of Portland with its budding connection to the wheat farmers in the Willamette and Tualatin valleys. The farmers would prosper by selling their surplus products in Portland's hub where they could be used to support local growth or shipped to more distant markets at a profit. In turn the farmers obtained tools and other supplies that they could not produce on their own.

In this heavily retouched 1854 photo, the edge of the forest still abuts the edge of the town, but the variety of businesses attests to Portland’s vitality.  The Oregonian Building is in the top right quadrant of this picture.  Thomas Jefferson Dryer, the editor, brought his printing press to …