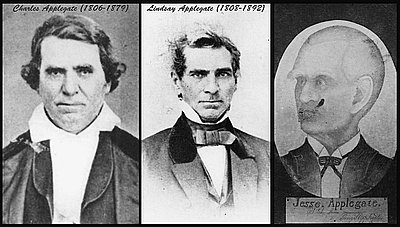 The Applegates were one of Oregon’s most influential early pioneer families, a fact reflected in the landscape. They have a river, a valley, a mountain, a trail, and a town named after them.

The history of the Applegates in Oregon begins in May 1843, when three brothers — Charles (1806-1879), Lindsay (1808-1892), and Jesse (1811-1888) — and their families left Missouri in search of new lands and new opportunities. The Applegates joined hundreds of other American men, women, and children on an epic transcontinental journey to the Oregon Country known as the Great Migration of 1843. Jesse Applegate, the youngest of the three brothers, led the so-called “Cow Column,” which consisted of the families with large herds of livestock.

The Applegate brothers settled in the Willamette Valley, joining a small but growing community of American settlers. In 1844, Jesse surveyed the townsite of Oregon City, the first incorporated American municipality west of the Rocky Mountains. The following year, he played an important role in the development of the provisional government, helping revise the organic law, Oregon’s first constitution.

Perhaps the best known accomplishment of the Applegates during their first few years in Oregon was Jesse’s and Lindsay’s role in the 1846 exploratory expedition that identified a new route into Oregon from the south, which came to be known alternately as the Southern Immigrant Route, the Scott-Applegate Trail, and the Applegate Trail.

In 1849, Jesse Applegate left Polk County for a place he named Yoncalla in the Umpqua Valley. Charles and Lindsay followed the next year. Charles and Jesse stayed in the Umpqua Valley until their deaths in 1879 and 1888 respectively. After serving several years as Indian agent for the Klamath Reservation, Lindsay retired to Ashland in 1869, where he lived until his death in 1892. All three brothers had large families, and many of their descendents continue to call Oregon home.

Applegate, Lindsay. “Notes and Reminiscences of Laying Out and Establishing the Old Emigrant Road into Southern Oregon in the Year 1846.” Oregon Historical Quarterly 22, 1921: 12-45.

From Jesse Applegate to John Minto

This letter of December 12, 1883, was written by Oregon pioneer Jesse Applegate to pioneer and Oregon State legislator John Minto.  Applegate was responding to a letter Minto had written him that questioned pioneer motivations for traveling overland along the Oregon or Applegate trails to settle in the Oregon Country.  …

In 1843 three brothers, Jesse, Lindsay, and Charles Applegate and their families, joined the emigrants who traveled the Oregon Trail. Times had been hard back home in Missouri. Prices of pork and other stock had fallen so low, there was no point taking them to market. Yet that suffering did …