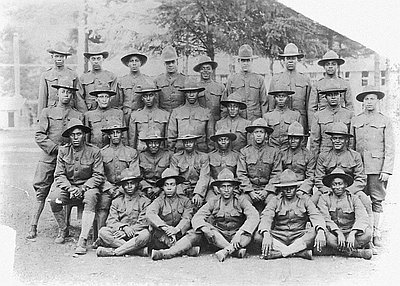 President Woodrow Wilson’s decision to declare war on Germany and enter World War I in April 1917 spurred one of the largest military mobilizations in the history of the United States. To ensure that the U.S. could recruit enough manpower for the fight, Congress passed the first Selective Service law on May 18, 1917. While both black men and white men were required to register for the draft, the possibility that they might serve side-by-side was not considered in the strictly segregated Army of the time. Most African American soldiers in World War I were assigned to Services and Supply (SOS), a branch of the Army was used primarily for jobs such as construction, dock work, and other physical labor. It is estimated that of the approximately 400,000 black soldiers who served in the war, about 380,000 were assigned to SOS units.

Volunteers and draftees from all over the American West reported to Camp Lewis (now Fort Lewis), Washington where they trained and awaited assignment to an active military unit. The “Portland Bunch” belonged to the 116th Depot Brigade, a group that performed administrative functions in support of other units. The men in this photo were probably not shipped overseas, as the armistice ending all aggression was signed on November 11, 1918, less than two months after this photo was taken. Figures from the Mobilization Division of the Provost Marshal General’s Office record that 68 African-Americans from Oregon were drafted during the war. The men of the “Portland Bunch” would have been part of the 1,093 black soldiers who were at Camp Lewis in August of 1918, according to research published by the U.S. Army Construction Engineering Research Laboratories in Champaign, Illinois.

The August 2, 1918, editions of the Oregon Journal and the Oregonian contained short news articles that described a banquet hosted the previous day that honored “more than fifty Negroes” who were leaving for Camp Lewis by train immediately following the farewell ceremony. Among the dignitaries taking part in the ceremony were Portland’s acting mayor, C. A. Bigelow, who presided over the ceremony, and the Rev. J.B. Isaacs of the Bethel A.M.E. church. The Rosebud Study Club, an African American women’s service group, assisted with the banquet. Another picture from the period shows the women riding a float in a parade that residents of the Albina neighborhood held for the departing recruits. The August 23, 1918 date on the “Portland Bunch” photograph suggests that the soldiers shown here were among the men honored at the farewell ceremony.

This photograph of black U.S. military soldiers in Portland, Oregon, shows men sitting together in an unnamed auditorium. They are attending an Urban League meeting designed for returning veterans who were having trouble finding employment after the war. The Urban League helped the veterans naviagate the discriminatory housing and labor …