Treaty with the Snake (Northern Paiute), 1865 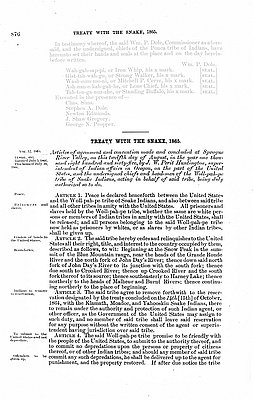 This treaty, dated August 12, 1865, is reprinted from the second volume of Charles Kappler’s Indian Affairs: Laws & Treaties, published in 1904. J.W. Perit Huntington, Oregon Superintendent of Indian Affairs, negotiated the agreement with the Hunipuitöka, a Northern Paiute group that originally inhabited portions of central Oregon along the Deschutes, Crooked River, and John Day Rivers. At the time, the Northern Paiute were known by Euro Americans as the “Snake” Indians, and the Hunipuitöka by the Klamath designation “Walpapi.”

The Northern Paiute peoples of the Great Basin, who lived in eastern and central Oregon and western Nevada, experienced intermittent contact with Euro American fur traders in the early decades of the nineteenth century. During the 1840s and 1850s, thousands of American emigrants traveled through Northern Paiute territory on their way to California and the Willamette Valley. This large-scale migration had a deleterious effect on the Paiute’s resource base, resulting in the depletion of wild game and seed plants, the exhaustion of fuel supplies, and the contamination of watering holes. Mineral strikes in central and eastern Oregon in the 1850s further aggravated tensions between Euro Americans and local Northern Paiute groups, occasionally leading to violence.

Northern Paiute leaders pursued a variety of policies in their relations with the Euro Americans streaming into Paiute territories. Some withdrew to more remote areas to avoid contact with whites, some sought to remain on positive terms with the newcomers by adapting to the dramatic social changes, and others violently resisted the encroachment on their lands. The most well-known leader to organize armed resistance was Paulina, from the Hunipuitöka Northern Paiute. Paulina became notorious for his attacks on both Euro American settlement as well as the Indian reservations at Warm Springs, Umatilla, and Klamath. Paulina and the other headmen of his band agreed to sign this treaty in the spring of 1865 after U.S. Army forces captured a group of Paiute hostages in the fall of 1864 on upper Paulina Creek. Paulina’s wife and son were among those captured. Despite the treaty agreement, Paulina and his group left the Klamath Reservation in April 1866.

This photograph of Chief Paulina was likely taken in 1865 when Paulina was living on the Klamath Reservation. Paulina was a well-known war leader associated with the Hunipuitöka, a Northern Paiute group that originally inhabited portions of central Oregon along the Deschutes, Crooked, and John Day rivers.