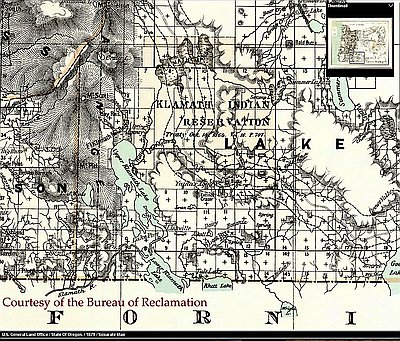 When white explorers entered the Klamath Basin in the 1820s, the Klamath Indians occupied the Upper Klamath Lake area, which included Klamath Marsh and the Sprague and Williamson rivers.  The Modoc people inhabited the Tule Lake area of Northern California and Southern Oregon.  Yahooskin land bordered Klamath territory to the west and extended east into present-day Lake and Harney counties.  Native uprisings and valuable tribal land, however, convinced the U.S. Government to relocate many Native groups onto reservations throughout the country.  The Treaty of 1864 merged the Klamath, Modoc, and Yahooskin tribes into the “Klamath Tribe” and onto a single reservation in the Klamath Basin.

The reservation contained thousands of acres of Ponderosa pine.  The treaty provided for a sawmill and proceeds from timber and lumber sales funded a tribal government and a health clinic.  By the 1950s, the Klamath Tribe was one of the wealthiest Native groups in the nation.  In 1954, despite Bureau of Indian Affairs and tribal opposition, Congress passed the Klamath Termination Act, which terminated federal recognition of the Klamath Tribe.  The Act discontinued federal social services, such as free education, and organized tribal lands into national forest areas or areas that could be sold.  This U.S. Government map, distributed in January 1961, explained how Klamath tribal lands would be organized into U.S. National Forest lands.  According to anthropologist Patrick Haynal, the Klamath were targeted for termination because of their timber assets and because Congress was convinced that the Klamath people were virtually assimilated into “white” society, meaning they no longer needed special assistance.  By the 1970s, the majority of tribal members were living below the national poverty line.

Stern, Theodore. The Klamath Tribe: A People and Their Reservation, Seattle, Wash., 1965.

The Modoc War was fought over land. The Modocs refused to move from their traditional homeland to the Klamath Reservation, demanding instead …