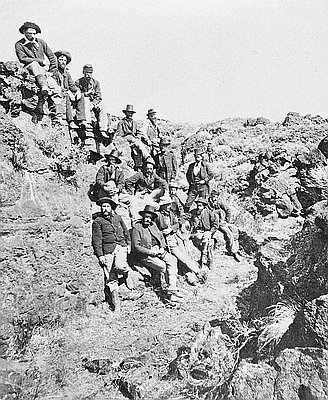 The Modoc War was fought over land. The Modocs refused to move from their traditional homeland to the Klamath Reservation, demanding instead a small reservation near Tule Lake. The white pioneers who had settled on Modoc lands were equally stubborn in their refusal to accept the presence of the Modocs. The result was violent conflict.

In the fall of 1872, a regular Army contingent, dispatched without the knowledge or permission of the region’s commanding officer, arrived at a Modoc village near Tule Lake to forcibly remove its inhabitants to the Klamath Reservation. Fearing persecution by the numerically superior Klamath, the Modocs refused to move to the reservation. A firefight broke out, and the Modocs fled to the nearby lava fields, where they made their final stand.

Fewer than 75 Modoc warriors managed to hold off a force of over 1,000 U.S. Army and volunteer troops for several months. The stand-off in the lava fields around Tule Lake was one of the few examples of siege warfare in the annals of the Indian Wars.

By the time the conflict was over, dozens of American soldiers and volunteers had been killed, including General E.R. Canby, the leader of the U.S. Army contingent, and dozens more were wounded. The Modocs lost more than twenty people, including four of their leaders who were hung as war criminals. Most of those who survived were sent to Oklahoma, where many died in exile.

In the end, the federal government spent hundreds of thousands of dollars to remove the Modocs, substantially more than the $20,000 it would have cost to buy the small plot of land over which the war was fought.

Further Reading:
Murray, Keith A. The Modocs and Their War. Norman, Okla., 1969.

Louis Heller, a photographer based in Yreka, California, likely took this photograph of Donald McKay, in 1873 during the Modoc War. McKay was a well-known leader of the Warm Springs Scouts from the Warm Springs Reservation in central Oregon.

Born in 1836, Donald McKay was the son of the well-known fur trader …