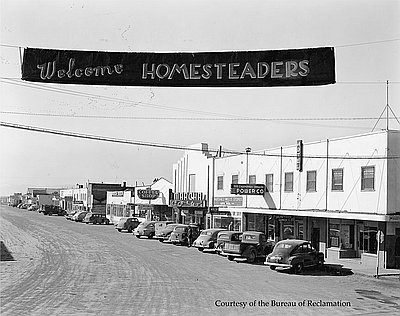 In 1917, the U.S. Reclamation Service (renamed the Bureau of Reclamation in 1923) offered 3,000 acres of land for homesteading in the Klamath Reclamation Project near Tulelake, California, just south of the Oregon border.  Each homestead was approximately 80 acres and would be served by an irrigation canal.  The homesteads were distributed by a drawing, with applications limited to Americans or naturalized immigrants who could demonstrate their ability to farm and who did not intend to resell the land.  Nearly 180 applications were submitted for the April 25 drawing.

In September 1922, military veterans were given the opportunity to apply for the second homestead offering 90 days prior to the general public.  The qualifications were similar to the first offering, although homesteaders were now required to reside on the land and maintain it for a minimum of one year before they would receive the title.  Moreover, they were taxed $90 per acre as a Klamath Reclamation Project construction fee.  For 80 acres, homesteaders paid $7,200 over 20 years.  With this new fee, uncertain crop yields, and equipment costs, the failure rate of the second group of homesteaders was high.

The Tule Lake homestead drawing in August 1946 attracted 2,150 applicants but offered only 86 units.  This drawing, however, was limited to World War II veterans, men and women, who provided proof of farming experience and a certificate of good health, owned less than 160 acres, submitted reference letters, and had accumulated at least $2,000 in assets.  After the drawing, the Bureau of Reclamation sold the homesteaders surplus materials and buildings from the Japanese Internment Camp in Newell.  The area’s isolation and the homesteaders’ lack of farm management skills, however, contributed to the failure of a significant number of Tule Lake farms in the 1950s and 1960s.

John Staunton’s father was a West Virginia stockbroker who came to the dry climate of this region for his health. As a veteran of World War I, Edward “Web” Staunton applied for a Klamath Project homestead. It was 1929. The New York stock market crashed, wiping Staunton out, and he …

The Tule Lake Relocation Center, seen here in 1947, is located about thirty miles southeast of Klamath Falls near Newell and Tulelake, California. Opened on May 27, 1942, it eventually held 18,000 Japanese American prisoners. After the center closed in March 1946 and the prisoners had been released, the War Relocation Authority …