Surrounded by electrically charged barbed-wire fencing with guard towers at the corners, the prisoners inhabited nine blocks, each containing sixteen tar-paper barracks, a mess hall, a recreation center, a laundry room, and bathroom facilities. The camp was overcrowded; its toilets and showers were unsanitary. Dust storms obscured the desolate view.

Many local farmers resented the fact that Japanese Americans were farming Bureau of Reclamation lands near the camp. But camp personnel enjoyed having servants cook and clean for them. “It was the life of Riley,” said the wife of one worker. “I never had it so good.”

As the war progressed, the Roosevelt Administration wanted Japanese Americans to serve in the armed forces and to perform tasks the civilian sector needed. First, their loyalty had to be established. Everyone in the camps received a long, ambiguously worded questionnaire. Honest answers reflecting the camp experience made many fail the test. Because a high percentage of Tule Lake prisoners were not able to prove their allegiance, it became a camp for “disloyals” only.

In October 1943, a truck overturned, killing one Tule Lake inmate and injuring others severely. After the camp director refused permission for a funeral service, prisoners went on strike. The WRA brought in strikebreakers from other camps to harvest crops.

When the national head of the WRA came to Tule Lake to assess the situation, a mob of more than 5,000 greeted him. Considering the camp out of control, he sent in armed forces with tanks and tear gas. For most of the following year, 350 men were interrogated and confined within a newly built stockade. No charges were ever filed against them, no hearings or trials took place. In protest, the Japanese government canceled a prisoner-of-war exchange agreement with the U.S. 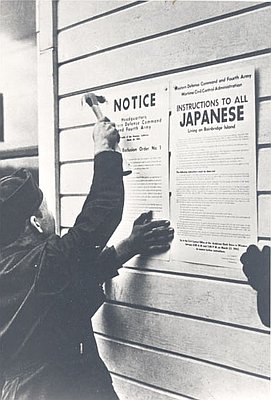 The Tule Lake Relocation Center, seen here in 1947, is located about thirty miles southeast of Klamath Falls near Newell and Tulelake, California. Opened on May 27, 1942, it eventually held 18,000 Japanese American prisoners. After the center closed in March 1946 and the prisoners had been released, the War Relocation Authority …