One quarter of Oregon consists of national forest lands. Within the drainage of the Klamath Basin, there are seven national forests, ranging from south-central Oregon across northwestern California.

Extensive stands of lodgepole and ponderosa pine within the Upper Basin were among the original forest reserves established by President Benjamin Harrison in 1893. Named Crater National Forest in 1907, they were incorporated into the national forest system established under the Department of Agriculture by President Theodore Roosevelt. Due to confusion with Crater National Park, the forest was renamed the Klamath Ranger District of the Rogue River National Forest in the 1930s.

In 1963, after the termination of the Klamath Reservation, Congress purchased half a million acres of former reservation land to create Winema National Forest. With another purchase a decade later, plus land transferred from three neighboring national forests, including the Klamath Ranger District, Winema amounts to 1.1 million acres today.

Winema National Forest has three federally designated wilderness areas and one National Wild and Scenic River. The Sycan River flows from Sycan Marsh within the Fremont National Forest, and then joins the waters of the Sprague and Williamson rivers in its journey toward Upper Klamath Lake. In 2002 the Winema and Fremont national forests were combined administratively for budgetary reasons, yet they remain separate entities.

Winema means “little woman chief.” A.B. Meacham, a peace commissioner during the Modoc War (1872–1873), gave this name to Toby Riddle, a Modoc married to Kentuckian Frank Riddle. The Riddles had served as translators during the war. Romanticized as Winema, Toby Riddle, together with several Modoc warriors, toured the nation in A.B. Meacham’s postwar medicine show, a traveling Wild West entertainment.

Winema National Forest has a special relationship with the Klamath Tribes, whose reservation status was restored by Congress in 1986. Three years earlier, the U.S. Supreme Court had ruled that the tribes retain their treaty rights in the region. These include the rights to hunt, fish, trap, and gather within their former lands. Accordingly, U.S. Forest Service managers work with tribal representatives on matters related to timber harvest methods, water quality, and wildlife habitat. 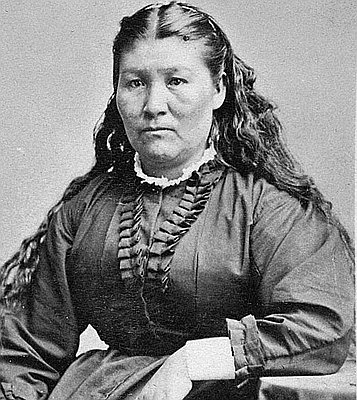 Crater Lake and the Klamath

This photo shows a Klamath Indian man posing on the rim of Crater Lake in the early twentieth century. Unimpressed with the man’s regular clothing, the photographer, Edward Curtis, suggested he dress in Plains Indian garb.

This photo, though a posed shot, suggests the complex relationship the region’s Native peoples …

Toby Winema Riddle, also known as Kaitchkana and Nanooktowa, was born near southern Oregon's Link River around 1850. She was related to Kintpuash, better known as Captain Jack, the leader of the 1872-1873 Modoc War. Both she and her husband, a white settler by the name of Frank Riddle, acted …

Presidential Proclamation 3423, signed in July 1961 by President John F. Kennedy, created the Winema National Forest from portions of the Rogue, Deschutes, and Frémont National Forests.  The U.S. Government acquired the rights to the new forestland in 1954 after the Klamath Indian Reservation had been dissolved.  Congress passed and …

Not all of the Klamath Project lands became available for homesteading after World War II. Conservationists and hunters did not want the wildlife refuges on the project to be farmed or harmed by farmers.

NEXT SECTION
The Controversial Sucker

When author William Kittredge was a high school student in Klamath Falls, he and his friends caught suckers in Klamath Lake with unbaited hooks. “Somebody would hang a hook in the side of one of those prehistoric-looking creatures, drag it in, and we’d leave the poor gasping thing with its blowhole mouth on the bank to die.