The Trial of Captain Jack

One party of twenty-two warriors led by Scarface Charley did not go far. They ambushed Company E of the 12th Infantry, killing twenty-five and wounding sixteen men. Fears of an Indian uprising swept the countryside. Then four Modoc warriors surrendered. Hooker Jim and three others offered to lead the Army to Captain Jack/Keintpoos in exchange for amnesty. They finally caught up with him in a canyon near Willow Creek.

The captured Modocs were kept in a stockade within Fort Klamath awaiting the tribunal. Six leaders went on trial. They had no defense counsel. Injured peace commissioner A.B. Meacham testified for the prosecution. Hooker Jim, turning state’s evidence, said, “I have been a friend of Captain Jack, but I don’t know what he got mad at me for.” Captain Jack, speaking in his own defense, recalled going to the lava beds with a few people after the raid on his Lost River camp. “I had never told Hooker Jim and his party to murder any settlers,” he said. Jack added that the four turncoats “all wanted to murder the peace commissioners; they all advised me to do it.”

Predictably, the tribunal sentenced Captain Jack and five other men to death by hanging. President Ulysses Grant commuted two of the sentences. After the executions, which occurred on October 3, 1873, the men whose lives Grant spared were imprisoned at Alcatraz.

The other prisoners of war were put on a train to Oklahoma. At the time Oklahoma was not a state; it was a territory set aside for Indians. Some Modocs still live there. Others are members of the Klamath Tribes in Oregon. 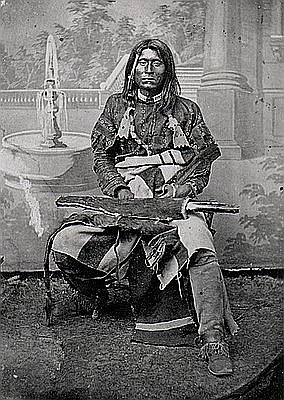 In 1843 three brothers, Jesse, Lindsay, and Charles Applegate and their families, joined the emigrants who traveled the Oregon Trail. Times had been hard back home in Missouri. Prices of pork and other stock had fallen so low, there was no point taking them to market.

NEXT SECTION
The People

The Klamath and Modoc peoples share a reservation with the Yahooskin, a Paiute tribe from high desert country to the east. Their ancestors spoke dialects of the same language while living in different parts of the Klamath Basin.