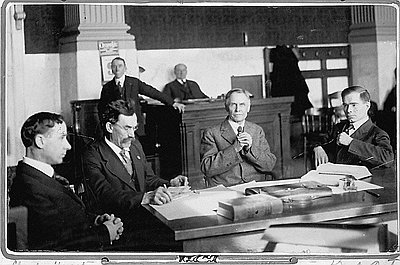 Following the lead of other western states, including Washington and Idaho, the Oregon State Legislature passed a criminal syndicalism law in 1919. The law, which targeted radical activists and labor unions, made it illegal for anyone to advocate violent political or social change, or to belong to any organization that did. In the case against Hurst, Fry, and Oster, prosecutors accused the men of possessing “inflammatory literature” related to the Industrial Workers of the World (IWW) and the Soviet Union’s communist party. The defendants asserted that they wanted to achieve change through majority rule, not violence.

As many as 100 Oregonians were prosecuted under the criminal syndicalism law, which was repealed in 1937 after increasing criticism by politicians, lawyers, and citizens concerned about civil liberties.

U’Ren was a reformer and populist activist who promoted more direct democracy. He was a primary force behind the state’s 1902 constitutional amendment allowing voters to put initiatives and referendums onto ballots.

This undated organizational/promotional poster was published by the Industrial Workers of the World (IWW) in New York for distribution throughout the United States and potentially any other English-speaking country.  The poster’s heading, “Education—Organization—Emancipation” represents the most basic strategy used by the IWW  in their struggle to wrestle control of the …

In the early twentieth century, most loggers and millworkers lived in company-provided towns or camps, where the accommodations, food, pay, and working conditions could range from nearly adequate to awful. In what was a volatile economic environment, young, footloose men, unencumbered by families or possessions, made good workers. At the …