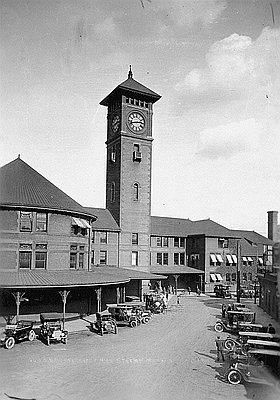 Union Station, shown here in 1913, opened in 1896 after several delays.  It was one part of Henry Villard’s grand vision for Portland.  Villard wanted to make Portland an important city.  With the completion of the transcontinental railroad, Union Station would be the passenger terminus for four railways, and the gracious Portland Hotel would help Portland become a destination for wealthy travelers not solely a crossroads waystation for people in transit.

Portlanders had expected a railroad as early as 1870, when stagecoach king and entrepreneur, Ben Holladay arrived and began to make plans for one.  However, it was not until several years after Henry Villard’s arrival in 1874 that the railroad became a reality.

When Holladay became financially overextended and began to default on loans, German investors sent Henry Villard to Portland to take over.  Villard worked for the German investors, and eventually secured enough money to buy a controlling interest in the company himself.  He began to develop rail interests in the region, and in 1880, received word that Northern Pacific planned to extend its own line to the Pacific Northwest.  In a noteworthy financial coup, Villard raised $8 million from over 50 investors and bought the competition out.  On September 8, 1883, the last spike was driven in the rail system that connected Portland to the rest of the world.  Though Villard personally failed to make his grand vision for Portland a reality, the railroad, Union Station, and the Portland Hotel were all eventually completed.

The architectural firm of Van Brunt & Howe of Kansas City and Boston prepared this presentation drawing of Grand Central Station in Portland about 1892. It depicts the third and final version of a design for Portland’s passenger railroad station. The building, known today as Union Station, was opened for …

The Oregon and California Railroad (O&C) was the first railroad to connect Oregon with California. Construction of the line began in Portland during the spring of 1868. Under the leadership of transportation tycoon Ben Holladay, railroad workers, many of them Chinese, extended tracks to Oregon City in 1869, to …

The Portland Turnverein was the local chapter of the German American athletic (gymnastic) association.  Turnverein, coined after the German word turnen, or physical exercise, was the name given to physical education clubs in Germany and the United States and members were subsequently referred to as Turners.  This …

Read full article ›
Railroads, Race, and the Transformation of Oregon

As symbols of the Industrial Revolution, railroads were powerful centralizing and dispersing mediums, concentrating populations in urban areas while also scattering people and communities across Oregon. Railroads also represented outside capital, with distant investors buying up mineral rights, timberland, and town lots and investing in new rail lines. Perhaps most …