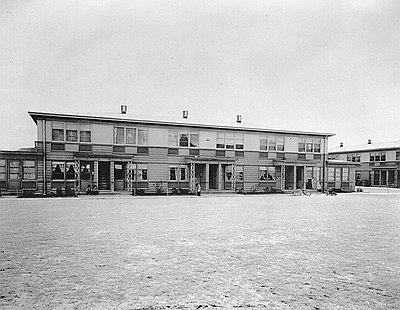 Built to address Portland’s World War II housing shortage, Vanport was called “The Miracle City.” Over 72,000 new workers arrived in Portland during the war. Industrialist, Henry J. Kaiser, imported so many workers from the eastern United States and the South that he had to charter special trains to carry them directly to Portland. The supply of vacant housing could not meet the increased demand, and new housing had to be available within a matter of months.

The Portland city council created the Housing Authority of Portland (HAP) within days of the Japanese attack on Pearl Harbor, but federal housing funds were not available until the end of 1942. The workers could not wait; Kaiser’s solution was to build his own city in the flood plain of the Columbia River.

The first residents moved in on December 12, 1942, and Vanport was soon the second largest city in Oregon with 35,000 people, a movie theather, five schools, a library, a police station, and after the war, a college.

The town was less than idyllic, however since housing was shoddily constructed, and HAP policy segregated African Americans into certain zones, assigning children to particular elementary schools by neighborhood, effectively segregating the elementary schools as well.

In the postwar period the population dropped to about 18,000, and in 1948, the Vanport Flood swept “The Miracle City” away. Some said that the only people who truly regretted the loss were those, including approximately 5,000 African Americans, who still lived there.

When war broke out, Portland was the only city on the West Coast without a public housing authority, yet it faced the most rapid increase in war workers and the most severe housing shortage in the country. The city council created the Housing Authority of Portland in 1941 to negotiate …