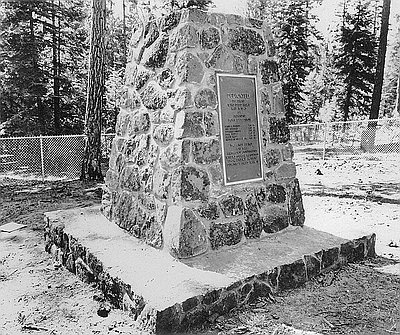 This monument was erected at the Mitchell Recreation Area in the Fremont National Forest, Lake County, Oregon in memory of Elyse Mitchell and five children who were killed on May 5, 1945 by a Japanese balloon bomb.  After a U.S. attack on Tokyo, April 18, 1942, Japanese military officials constructed a fleet of approximately 9,000 balloons made of paper or rubberized silk to carry anti-personnel and incendiary bombs 6,000 miles eastward to North America.   U.S. Air Force officials guess that about one thousand of these balloons reached the continent, but concluded that there were only 285 reported sightings, mostly on the West Coast, although two were later found in Michigan.

The Japanese launched the first balloons on November 3, 1944 from the east coast of the main Japanese island of Honshu.  Two days later, the first balloon was sighted by the U.S. Navy 66 miles southwest of the San Pedro, California.  Air Force officials later explained that when more balloons were sighted, the U.S. Government decided to keep them a secret to reduce the chance of public panic and to deny the Japanese of any information about the success or failure of their weapon.  After the May 5 explosion, however, government officials notified the public of the dangerous balloon bombs.  Elyse Mitchell and the five children were the only known World War II fatalities in the continental U.S. as a result of enemy action.

In 1898 B.F. Allen, a forest superintendent in northern California, suggested that a forest reserve be established in the Warner Mountains near Lakeview in order to regulate timber cutting and …

This 1909 article in the Lakeview Examiner reported that 1,694,354 acres of the surveyed land in Lake County was still “unappropriated.” The article was part of a larger promotion extolling the many opportunities for settlers in the future garden spot of the Northwest. Lake County, located in south-central Oregon, has an …