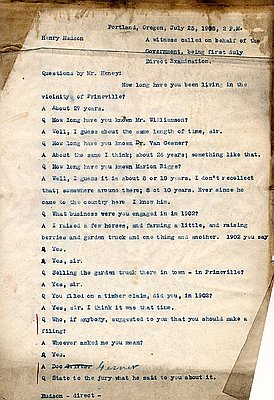 During the first decade of the twentieth century Oregon’s national reputation was marred by a series of embarrassing land fraud scandals. Federal investigations revealed that land speculators and timber companies had illegally obtained large portions of the public domain with the assistance of public officials. Federal prosecutors indicted most of Oregon’s congressional delegation, including John N. Williamson (1855-1943), a Republican congressman who represented Oregon's second district from 1903 to 1907.

Federal investigations led to the indictment of Gesner, Williamson, and Gibbs for subornation of perjury in 1905. The prosecution argued that the three defendants had attempted to illegally obtain land claims under the Timber and Stone Act of 1878. This act was designed to allow settlers to claim up to 160 acres of timber and mining land that was unfit for agriculture. The prosecution argued that Gesner, Williamson, and Biggs conspired to subvert the act by paying local residents to take up about 16,000 acres in claims near Prineville with the intention of immediately selling the land to Gesner and Williamson, who ran a sheep operation in the area and wanted to obtain title to valuable summer rangeland.

It was a difficult case for the prosecution as several key witnesses conveniently “forgot” many of the facts pertaining to the case. The defense admitted that Gesner and Williamson had loaned money to settlers, but asserted that there had been no contract to buy the land prior to the claims being made. The jury was deadlocked and a new trial was rescheduled. This second trial also ended in a hung jury. Finally, after a third trial, Gesner, Williamson, and Gibbs were found guilty and sentenced to a fine and between five and ten months in jail.

Williamson appealed his case to the U.S. Supreme Court, which overturned the original verdict in 1908. Four years later, President William Taft pardoned Gesner and Gibbs, both of whom had already served their sentences. The U.S. Attorney General revealed that the prosecution had illegally eliminated potential jurors they thought were unlikely to convict the defendants and had threatened witnesses with prosecution if they did not testify against the three defendants, casting doubt on the veracity of their testimony.

This sketch by Harry Murphy was published in the Oregonian on June 29, 1905. It shows United States District Attorney Francis J. Heney making an argument in the trial of U.S. Senator John H. Mitchell, shown at the top of the sketch. Also shown are Judge John J. De Haven …