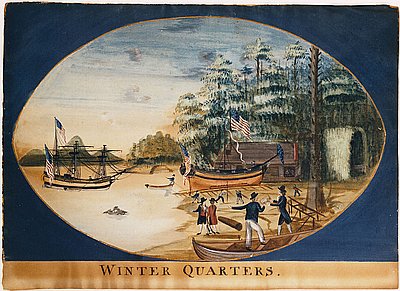 Davidson was a housepainter and occasional artist when he joined the second fur trade expedition of Captain Robert Gray in late September 1790. Gray’s Columbia Rediviva made the voyage from Boston to the Northwest Coast in eight months, arriving at Clayoquot Sound on Vancouver Island in early June 1791. The expedition passed the summer months trading with the various aboriginal groups up and down the coast. In September 1791, Gray established a “winter quarters” on Clayoquot Sound. He named the wintering site “Adventure Cove” and referred to their encampment as “Fort Defiance.” In the 1970s, historians and archeologists identified the fort’s original location on Meares’ Island. Davidson’s painting depicts the scene at Adventure Cove after the construction of the sloop Adventure, which first mate Robert Haswell would later use for trading along the west coast of Vancouver Island in the spring of 1792. The painting features the Columbia at anchor with her topmasts removed, as well as what appears to be a self-portrait of Davidson showing his illustration of the scene to Captain Gray.

In contrast to the illustration Launch of the North West America from John Meares narrative of 1790 in which Native people are prominent, in Davidson’s painting the local indigenous people, the Tla-o-qui-at (Clayoquot), are notable for their absence. The artist represents Meares Island as a virgin land, empty but for towering forests. However, this is misleading, since by the early 1790s Clayoquot Sound was a central trading center for the maritime fur trade. Local Tla-o-qui-at leader Wickaninnish dominated the regional trade from his winter and summer villages on Meares Island. Over the fall and winter of 1791-1792, officers and crew of the Columbia engaged in lively exchanges with Wickaninnish and his people that involved trade, celebrations and common meals. Although relations between the two groups had begun on a positive note, by February 1792, tensions had developed due to cultural misunderstandings characteristic of the maritime fur trade. Captain Gray abruptly broke off relations with Wickaninnish, ordering him never to return the Columbia. First mate Robert Haswell wrote in his journal in response to Gray’s actions that “it is therefore a pity to make an open rupture with people from whom no harm is to be expected but must be attributed to a sudden irritation which will cause a man to do things that he will afterwards be sorry for.”