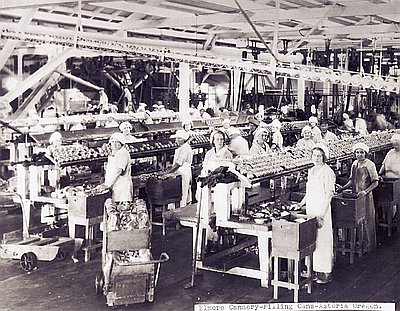 In the 1860s most workers in Columbia River salmon canneries were local white men. With the expansion of the salmon canning industry in the 1870s, Chinese men became the dominant workforce. However, as the number of Chinese immigrants declined after the 1882 Chinese Exclusion Act, canneries began employing Japanese immigrants as well as local white men, women, and children in greater numbers. By the time the photo above was taken, perhaps in the 1930s, white women made up a substantial portion of the cannery workforce.

White women were not the only women who worked at Columbia River canneries. Historian Chris Friday found that in the mid-1920s the Elmore Cannery employed an average of eighteen white women, seven Japanese women, and three Chinese women per month. He writes that can fillers generally worked in groups of about a dozen and that the “assignment of workers to tables in the plant was based primarily on ethnicity, with other considerations secondary. Japanese women thus formed one unit, and European American women several others. The three Chinese women, Irene and Constance Wong and a Mrs. Chan, were too few in number to work at their own table.”

Many cannery workers started working at a young age. Christine Hendrikson Loback, a Norwegian immigrant, started working in Astoria-area canneries in 1915 when she was fifteen years old. “I had to get a permit from the state to work,” she later remembered. The Child Labor Commission, established in 1903, regulated the employment of minors in the early twentieth century. In 1912 a labor inspector visited the Columbia River Packers Association’s can-making plant to check for permits. The inspector found three boys and a girl, ranging from fourteen to fifteen years old, who did not have permits. The association wrote the Child Labor Commission requesting permits, noting that the minors were “strong robust children and are very ansious [sic] to work to assist their parents. The work is very easy and light work, in fact practically all they have to do is to watch the machines….It is a matter of real charity to have them so employed, and certainly much more desirable than that they should be running the streets without occupation.”

Although the Finns of Astoria provide an example of the expression of ethnic identity among European immigrants, the related documents accompanying this essay suggest that European ethnicity was often invisible in Columbia River salmon-canning towns. While members of these diverse groups likely embraced ethnicity as part of their personal or …