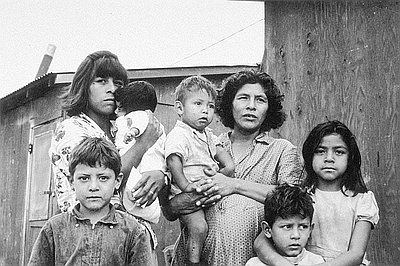 This ca. 1967 photograph shows Hispanic women and children standing near plywood-sided cabins at a farm labor camp in the Willamette Valley.  The photograph is from the Valley Migrant League (VML) collection. Between 1965 and 1974, the VML offered services to seasonal farm laborers in the Willamette Valley, including help with housing issues, education, job development, childcare, and counseling.

Some farm owners operate labor camps to house migrant populations of workers, many of which are Hispanic. Seasonal farm laborers often travel with their families around the Pacific Northwest, and the nation, to harvest a variety of crops.

In 1986, the Oregon Department of Labor reported that ninety percent of the 118 camps that officials visited did not comply with state regulations for health and safety. They noted poor lighting, structural problems, over crowding, poor ventilation, lack of running water and bathrooms, and the presence of vermin at many sites.

In 1991, the Community and Shelter Assistance Corporation (CASA), which works to improve farm worker housing in Oregon, reported that it was increasingly difficult for seasonal farm laborers to find affordable and decent housing. Many farm owners have told state officials that they could not afford to improve and maintain their aging camp facilities.

This photograph shows Mexican citizens weeding and thinning in an unidentified sugar beet field in Oregon, probably in Malheur County, during World War II. In 1942, the United States government negotiated with Mexico to import workers in order to alleviate a serious national agricultural labor shortage. The Mexican Farm Labor …