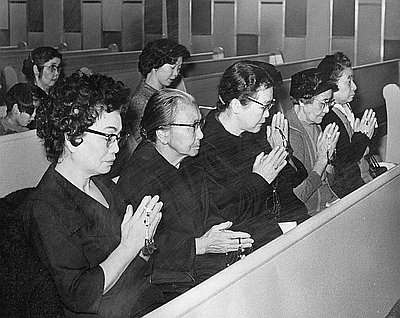 This photograph was published in the Oregon Journal on November 25, 1963. It shows a group of women praying at Portland’s Nichiren Buddhist Church during a memorial service for President John F. Kennedy, who had been assassinated three days earlier.

Nichiren Buddhism is a school of Japanese Buddhism that is based on the teachings of Nichiren, a monk who lived in Japan during the thirteenth century. It is best known for its focus on the Saddharmapundarīka-sūtra (Lotus Sutra), one of the most influential texts in the Mahayana Buddhist canon. The caption that accompanied the photograph above mentions that the service held for President Kennedy centered on this sutra.

Buddhism came to Oregon in the nineteenth century with the first immigrants from China and Japan. Chinese immigrants established numerous temples, often referred to as “joss houses,” throughout the state during the latter half of the nineteenth century. While Chinese joss houses often had statues of Buddhist deities, they were not considered Buddhist churches. Japanese immigrants established the first Buddhist church in Oregon, the Portland Buddhist Church, in 1903 under the leadership of Shozui Wakabayashi, a native of Toyama, Japan. The church, a branch of the Jodo Shinshu (Pure Land school), built their first permanent building in 1910, by which time they had over five hundred members. Wakabayashi also organized the Buddhist Women’s Organization, a Dharma school (similar to a Christian Sunday school), and the first Japanese language school in Portland.

In 1930 Ryushin Okihara, a Japanese American minister from Seattle, helped establish Portland’s first Nichiren church. Two years later the members of the Nichiren Buddhist Church built a permanent building in north Portland. During World War II most of the members of the church were interned at the Minidoka Relocation Center in southern Idaho. The church’s minister, Yohaku Arakawa, continued to hold services in the camp for the duration of their internment, which lasted until 1945.