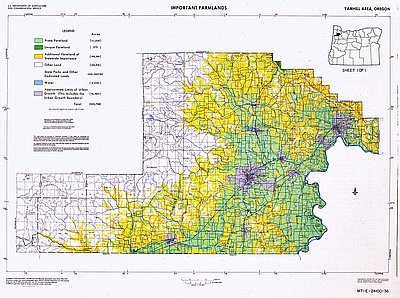 The U.S. Department of Agriculture and the Soil Conservation Service published this 1980 map showing designated farmland and urban growth boundaries in Yamhill County.

Despite objections from some businesses and land owners, Governor Tom McCall signed Senate Bill 100 into law and defended the controversial legislation. Since then, voters and the courts have rejected several initiatives aimed at dismantling the law.

Land Use in the 1995 Oregon Legislature

This pamphlet was written and published by Robert Liberty of 1000 Friends of Oregon. As the title indicates, the pamphlet tells the "story of land use in the 1995 legislature." On May 29, 1973, Governor Tom McCall signed Senate Bill 100 into law, creating a statewide structure and mandate for …