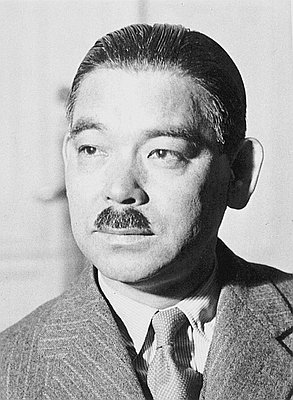 This photograph of Yosuke Matsuoka—part of the Oregon Journal collection—was taken in July 1940. Matsuoka was a Japanese diplomat who played a key role in Japan’s foreign relations from the 1900s through the early 1940s. He also happened to have a strong connection to the state of Oregon.

Born in present-day Hikari City on March 4, 1880, Matsuoka emigrated to Portland when he was thirteen years old with the intention of furthering his education. He first stayed at the Japanese Methodist Mission, which had just opened, before moving in with a Scottish immigrant family, who gave him room and board in exchange for house work.

Matsuoka moved to Oakland, California, for a short time, where he graduated from high school, then returned to Oregon to attend law school at the University of Oregon, taking classes at night and working during the day for Shinzaburo Ban, who ran the largest Japanese employment agency in Oregon. Soon after his graduation in 1900, Matsuoka returned to Japan to care for his ailing mother.

Matsuoka would go on to have a long, controversial diplomatic career during one of the most tumultuous periods in the history of Japanese foreign relations. He believed that Japan, like the other island empire, Great Britain, was destined to expand outward. “Both must be colonial empires,” he told one reporter, “both must be maritime and naval powers.” In 1930, Matsuoka was elected to the Japanese parliament. Three years later he pulled Japan out of the League of Nations while serving as his nation’s chief delegate after the League condemned Japan’s invasion of Manchuria. He went on to serve as foreign minister from 1940-1941, during which time he signed the Tripartite Pact with Germany and Italy. He was ousted from this position in 1941, after which his health took a turn for the worse. He was arrested as a war criminal in January 1946, but died before he was put on trial.

Many American diplomats and editorialists considered Matsuoka a pro-German opportunist who turned his back on the country that had welcomed him so warmly as a youth. His biographer argues, however, that “Matsuoka’s decisions as foreign minister likely had more to do with his vision of global power politics than with anti-American attitudes.”