Native American women from Chemawa train to work in shipyards 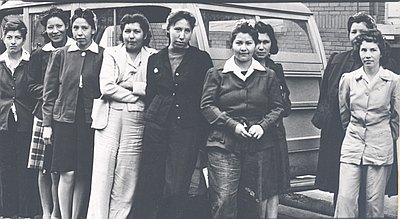 When the labor market opened up during World War II, more than 65,000 Native Americans worked for war industries or joined the armed forces. Historian Grace Gouveia estimates that one fifth of Native American women who were able to work took jobs off the reservations. The Bureau of Indian Affairs (BIA) helped recruit those workers and facilitated their training and placement in shipyards and other industrial worksites. About 800 Indian women joined the armed services during the war, many recruited from off-reservation boarding schools.

In Oregon, the Chemawa Indian School near Salem sent about forty students to a training facility in Eugene run by the National Youth Administration (NYA)—a program established by the Works Progress Administration during the Depression to help put young people to work. In 1942, the NYA was transferred to the War Manpower Commission, and training facilities began to focus on skills such as welding and electrical to prepare students for shipyard work. Most of the trainees in the Eugene facility went on to work for the Kaiser Shipyards in Portland and Vancouver.

Women were included in the training programs to make up for the shortage of male laborers who had enlisted in the military. The BIA fully supported the integration of Native women into the American workforce and armed forces, in large part because it reinforced a policy of cultural assimilation. Because both federal and local governments were still supporting various forms of segregation, the inclusion of Indians in the army and war industries presented an interesting question: Should Native Americans be classified as “colored” or “white”? Indians resisted segregation, and for the most part the federal government relented, allowing Native American men and women to serve and work without being subject to racial exclusion practices, as African Americans were. After the war, many Native American women returned to reservations and used their skills to seek new work and leadership opportunities.