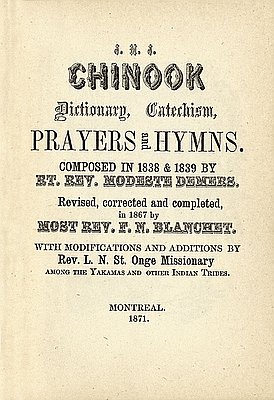 The 1871 edition of Father Modeste Demers’s Chinook Dictionary, Catechism, Prayers, and Hymns was edited and amended by Rev. F.N. Blanchet and Rev. L.N. St. Onge. Demers, who ministered primarily to Native Americans in the Pacific Northwest from 1838 until his death in 1871, compiled the dictionary as an aid for missionaries who would follow him to the Pacific Northwest.

In the Chinook Dictionary, Demers—like many early historians—erroneously attributed the origins of the Chinook Jargon to Hudson’s Bay Company traders who plied the Northwest in pursuit of furs. Recent scholarship and linguistic analysis, however, argue that the foundations of the jargon predate the arrival of Europeans in the region, and that English and French words were added to an existing vocabulary composed primarily of Chinookan, Salishan, and Mowachahtan (Nootkan) components. As the Euro American presence grew in the Northwest, the use of Chinook Jargon spread, rapidly becoming the common language in which economic, social, and political transactions were negotiated in a territory that spanned from the California border to southern Alaska and from the Pacific Ocean to the Rocky Mountains.

When Demers, a Catholic missionary, arrived at Fort Vancouver in 1838, he quickly recognized the value of the Chinook Jargon to the ongoing efforts to convert the region’s Indians to Christianity. Soon after his arrival, he began compiling a dictionary that he hoped would enable other missionaries to readily and effectively communicate with the Native inhabitants throughout the Pacific Northwest. In addition to compiling the dictionary, Demers also translated prayers and other elements of the Catholic Mass into the jargon for inclusion in what would also be known as “The Missionary’s Companion on the Pacific Coast.”

While Chinook Jargon is most often associated with the Pacific Northwest fur trade of the nineteenth century, it is by no means a lost or dead language. As late as the 1970s, church services in remote regions of British Columbia were still being conducted in the jargon. The language is also being revived and is currently being taught as an official tribal language on the Grande Ronde Indian Reservation.

Gill, John. Gill’s Dictionary of the Chinook Jargon: With Examples of Use in Conversation and Notes Upon Tribes and Tongue. Portland, Ore., 1933.

These illustrations from the journal of William Clark depict what many white explorers and fur traders considered to be a peculiar practice among the Chinookan people and other Northwest Coast Indians, head flattening. The sketch at the top of the page shows the method by which a baby’s head was …