Act to Prohibit the Intermarriage of Races, 1866 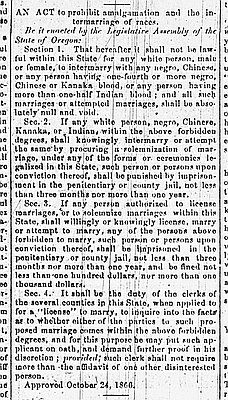 The Oregonian clipping featured here presented the language of a new Oregon law approved by the Legislature on October 24, 1866. It banned miscegenation—marriage between members of different racial groups. The second of its kind in Oregon’s history, the legislation joined similar passages in the nation’s law books, which had featured such laws since colonial times.

While an earlier Oregon law passed in 1862 banned marital unions between whites and persons with a quarter or more of “Negro blood,” the legislation featured here was more explicit with respect to who could not marry whom. It added Chinese and “Kanaka,” or native Hawai’ian, to the list of those who could not intermarry with whites.

The law levied criminal sanctions against marriage license clerks, officiants who performed ceremonies, and couples who flouted the ban. Further, the legislation rendered such marriages “null and void.” An invalidated marriage could have real ramifications –particularly for women who stood to lose control of property upon their husbands’ deaths. In one 1921 Oregon court case, for example, Ophelia Paquet, who was Native American, lost control of her late husband’s estate to her brother-in-law when the Oregon Supreme Court ruled her marriage of thirty-three years null and void, because her husband had been white.

The Court in the Paquet case ruled that laws banning interracial marriage did not conflict with the Fourteenth Amendment, which ensured equal protection under the law. The justices used the same rationale as those of state courts in similar cases nationwide—they maintained that the law applied equally to white persons seeking to enter such marriages as it did to members of the other racial groups named in the legislation.

In 1951, Senators who opposed the successful repeal of Oregon’s anti-miscegenation laws echoed this reasoning. They also voiced concerns that such marriages would be “unfair” to resulting children. However, Oregon lawmakers repealed all legislation banning interracial marriage in 1951, sixteen years before the U.S. Supreme Court declared all the nation’s miscegenation laws unconstitutional in 1967.