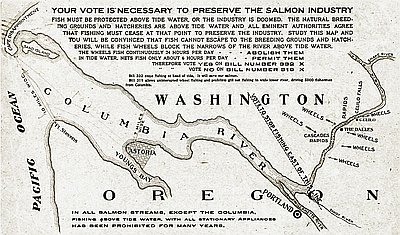 These two advertisements were published in the spring of 1908. The first document, titled “Your Vote is Necessary to Preserve the Salmon Industry,” represents the views of lower Columbia River gillnetters. It features a map of the Columbia River with the estuary shown at an exaggerated size, while the river as it passes through the Columbia Gorge is depicted as a narrow channel cluttered with fishwheels. The accompanying text claims that the map proves that “fish cannot escape to the breeding grounds and hatcheries, while fish wheels block the narrows of the river above tide water.”

The second map, produced by upper river fishwheel owners, shows a much smaller estuary choked with nets while the Gorge is shown as only lightly populated with fishwheels. The accompanying text claims that this map is the “real map,” implying that the gillnetters’ map misrepresents the actual geography of the salmon fishery. It states that the lower river fishery was responsible for 95 percent of the salmon harvest, and that the lower river fishermen just wanted to “hog it all.”

Upper-river and lower-river fishery interests had long been bitter competitors, each accusing the other of destroying the salmon runs. This competition came to a head in 1908, when both sides submitted initiatives that aimed to shut down the other. The gillnetters’ bill proposed the abolition of commercial fishing above the Sandy River, which would have eliminated fishwheels. In response, upper river fishwheel operators submitted their own initiative, which sought to close the best gillnetting grounds and to limit commercial fishing to daylight hours. This would have effectively eliminated gillnetting, which was most effective at night.

Both sides framed their initiatives as conservation measures. The two advertisements reproduced here claim that their respective initiatives will “protect our salmon” and “preserve the salmon industry.” But the two competing initiatives had less to do with salmon conservation and more to do with social and geographic competition. The gillnetters argued that the conflict between upper -river and lower-river fishery interests was a fight between the “powerful corporate interests” and “the people.” For their part, the wheelmen accused the gillnetters of trying to set up “a monopoly of their own, a miniature Standard Oil” backed by “one of the largest salmon trusts in the world seeking to throttle legitimate competition.”

The voters of Oregon passed both initiatives in November 1908, leading to chaos in the Columbia River fishery. A federal judge soon issued an injunction against both laws, and the following year the state legislature repealed them.

Under territorial and federal land-claim acts, white farmers took possession of large tracts of land around the lower banks of the coastal rivers and their estuaries. Dairying, the earliest and most important farming enterprise in Clatsop County, was well established by 1845. Dairy farmers diked and drained the marshy tide …

This ca. 1891 watercolor painting by Cleveland Rockwell shows fishers using gillnets on the Columbia River. Gill Netters Near Rooster Rock is one of hundreds of paintings Rockwell created, many of which featured maritime themes.

For more than thirty years, Rockwell worked for the U.S. Coast and Geodetic Survey. He …

This 1937 photograph, taken by Ray Atkeson, shows men fishing with a gillnet near or at the mouth of the Columbia River. As a professional photographer, Ray Atkeson documented Oregon’s people and landscapes from 1928 until his death in 1990.

This picture shows a bow picker, a locally used style …