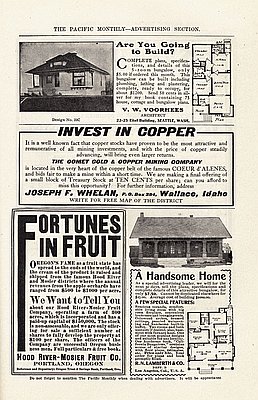 Shown here is a page of advertising from the September 1907 issue of Pacific Monthly, promoting investment in copper mining, “fortunes in fruit,” and plans for building suburban bungalows. Pacific Monthly was published in Portland from 1898 until 1911, when it was absorbed by Sunset Magazine of San Francisco. Edited for readers along the Pacific Coast, it published articles about regional industry and agriculture, short stories by local writers, and news and editorials.

The bungalow style was immensely popular for residences from about 1900 until after World War I. In Oregon, for example, the Bungalow Book Publishing Company of Portland issued The Craftsman Book of Bungalows, a catalog from which the new owners of suburban lots or country orchard lands could buy plans. Local contractors—or sometimes the future homeowners themselves—used the detailed specifications and plans to purchase the building materials and to guide construction. A step beyond the use of off-the-shelf plans was the purchase of a partially-fabricated house, shipped fully equipped for easy set-up. Popular in the Midwest in the 1920s through such companies as Sears, Roebuck and Aladdin, these houses were also found in Oregon. The Millmade Construction Company of Portland promoted its Ready-Cut and Portable Houses for Economy about 1920.

Bungalows were characterized by wood frame construction, often with some elements of the house built of river rock (cobbles) or rough-surfaced brick (clinker brick). They frequently had low-pitched roofs, sometimes with dormer windows, and generous porches or verandas with dramatic supports, such as tapered elephantine columns of the boxed columns seen in the advertisement for “a handsome home.” Stylistic references to Asia were common, with overhanging eaves supported on sweeping wooden brackets.  Even modest bungalows often featured a fireplace and built-in bookshelves and cabinets in clear-finished woods. The Pacific Coast bungalow designs anticipated some of the aspects of the Northwest Regional style that developed in the 1930s, such as the forthright use of indigenous materials, especially wood, and the use of outdoor areas such as porches for living spaces.

Several popular social and cultural movements had a visible impact on Oregon’s built environment early in the twentieth century. Among these were the Arts and Crafts movement, which originated in late nineteenth century England among such social reformers and writers on esthetic topics as William Morris and John Ruskin. They …

These plans for a modest urban cottage were prepared by the Portland Construction Company in 1888 for George C. Flanders. The house was built at 1826 6th Street in East Portland, at the time a separate city, on a lot that is today at Southeast 6th Avenue and Mill Street in …