Several popular social and cultural movements had a visible impact on Oregon’s built environment early in the twentieth century. Among these were the Arts and Crafts movement, which originated in late nineteenth century England among such social reformers and writers on esthetic topics as William Morris and John Ruskin. They were concerned with the brutality and dehumanizing aspects of the rising industrial order, and their approach was to revive the ideals of craftsmanship and of useful objects—and structures—that were also beautiful. The architectural manifestation of the movement grew in the United States in the 1900s. A typical Oregon expression of the movement could be seen in architect-designed residences in a Tudor style that emphasized some traits of traditional English vernacular building. An allied and far more common architectural expression was the bungalow or Craftsman style, residential versions of which were popularized in magazines, sold as plans by mail, and popped out by real-estate developers during the 1910s and 1920s.

The style was especially suited to suburban life, with houses surrounded by lawn, garden, and a fruit tree or two. Bungalows emphasized the use of natural materials and fine craftsmanship and featured small-paned windows and notable chimneys—expressions of the traditional appeal of home and hearth. Bungalows were typically of wood balloon-frame construction, although some were built of brick, and they hugged the earth with low-pitched gable roofs with wide overhanging eaves. Clinker brick or river cobbles were often used to build chimneys and supporting pillars for front porches. So popular was the bungalow design that it was even adapted to build grocery stores and fire stations in residential areas.

During 1906-1914, a number of East Coast college graduates were influenced by the Country Life movement, which aimed to improve rural living by providing social amenities that would make it as appealing as city life. Many became “colonists,” moving to the West Coast where they hoped to combine the advantages of a rural livelihood and an urban life. In Oregon, these well-educated Easterners were influential in the developing apple and pear “ranches” in the Rogue River and Hood River valleys, where they built large bungalow and Craftsman-style houses. They were also instrumental in bringing such institutions as country clubs and live theater to smaller cities such as Hood River and Medford. 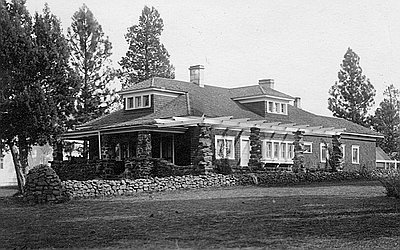 Shown here is a page of advertising from the September 1907 issue of Pacific Monthly, promoting investment in copper mining, “fortunes in fruit,” and plans for building suburban bungalows. Pacific Monthly was published in Portland from 1898 until 1911, when it was absorbed by Sunset Magazine of San Francisco. …