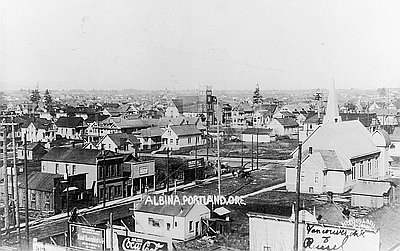 In 1883, the construction of the Union Pacific Railway and the terminal yards caused both the population and the property values in Albina to soar.  From 1887 until 1891, Albina city ordinances primarily addressed the economic interests of the railroad and other large investors, making it essentially a company town.  Just days before Albina’s planned incorporation into the city of Portland was finalized, Albina’s city council hurriedly passed ordinances and signed contracts for such expenditures as paved roads, city parks and lighting, which benefited property owners but created a financial burden for the taxpayers of the newly combined city.

Prior to the opening of the Morrison Bridge in 1887, parts of Albina were uninhabited wetland.  However, as transportation from the central district became easier, population in Albina continued to rise, as did land prices, quadrupling in the first decade of the 20th century.  By 1910, a year after this picture was taken, the population on the eastside reached 120,000.

When it joined with Portland in 1891, Albina’s land area covered thirteen and a half square miles including St. Johns, more than Portland and East Portland combined.

Beginning in the 1960s, the City of Portland, with the cooperation of the Portland Development Commission (PDC) and Emanuel Hospital, began to lay the groundwork for redeveloping the Albina neighborhood by tearing down existing buildings to make room for a hospital expansion. The historically Black neighborhood was labled "blighted" and …

What began as a political rally to stir the African American community to “revolution” in Irving Park on Sunday, July 30, 1967, turned into two-nights of disturbances.  Two to three hundred people threw bottles and rocks at automobiles and through store windows, while a few hurled firebombs through store windows causing …