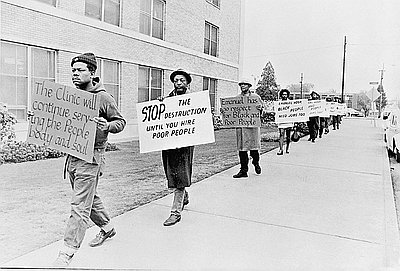 Beginning in the 1960s, the City of Portland, with the cooperation of the Portland Development Commission (PDC) and Emanuel Hospital, began to lay the groundwork for redeveloping the Albina neighborhood by tearing down existing buildings to make room for a hospital expansion. The historically Black neighborhood was labled "blighted" and marked for urban redevelopment, which allowed the city to condemn hundreds of homes and businesses. Clearing land for the project displaced a significant number of Albina neighborhood residents, as hundreds of buildings were razed. The tear-down included the Black Panthers' Fred Hampton Memorial People´s Health Clinic on North Williams Avenue, prompting the group to organize a protest. Other residents who faced losing their homes and businesses joined the protest against the PDC in front of Emanuel.

Portland's Black community had faced a long history of displacement in Portland. A significant number of African Americans had migrated to the area during World War II to take jobs in the shipyards, but housing was scarce. Most of the 20,000 to 25,000 African Americans who migrated during the war lived in Vanport, a federally funded city built specifically for war workers and their families that grew to become the second most-populated city in Oregon. The housing in Vanport was not meant to be permanent, but it became so for many African American families who stayed after the war was over. In 1948, the Columbia River flooded, and the dike protecting Vanport broke, leaving nearly 17,000 people homeless. Those who needed new housing were disproportionately African American.

After the flood, many African Americans moved to northeast Portland to the area that is now known as the Rose Quarter. It was one of the few sections of the city open to Black residents, who had been the victims of housing discrimination and redlining. In November 1965, as part of the development of Portland’s downtown and the inner east side, the city decided to build a sports coliseum in the Rose Quarter. The city planning commission claimed that housing in the area was substandard, and the neighborhood—including much of the thriving Williams Avenue—was leveled.

What began as a political rally to stir the African American community to “revolution” in Irving Park on Sunday, July 30, 1967, turned into two-nights of disturbances.  Two to three hundred people threw bottles and rocks at automobiles and through store windows, while a few hurled firebombs through store windows causing …