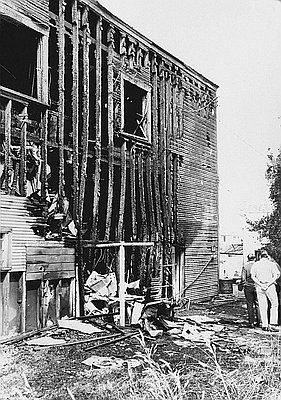 What began as a political rally to stir the African American community to “revolution” in Irving Park on Sunday, July 30, 1967, turned into two-nights of disturbances.  Two to three hundred people threw bottles and rocks at automobiles and through store windows, while a few hurled firebombs through store windows causing $20,000 in damage at one grocery store and damaging dozens of others.

Rumors of trouble had circulated for several days, and parents, ministers and community leaders spent those days asking area youth to stay home.  On Sunday afternoon, speakers from Seattle and San Francisco, along with a few locals, addressed a group of about 150 people, saying that they were not there to incite riot, but rather “revolution” which was another matter.  The excited crowd jeered them and began lobbing rocks and bottles at passing autos, while a group of four or five beat a park employee.

Fewer people were involved on the second night, and the police responded immediately to the flare-up.  Mayor Terry Schrunk and Governor Tom McCall had alerted the National Guard and kept them close enough to respond within 10 to 15 minutes if they were needed.  In addition, a contingent of State Police was nearby.  McCall believed this was prudent precisely because local authorities lacked experience with this kind of racial situation, so it was better to be over-prepared than under-prepared.

McCall placed some of the blame for the incident on Portland’s lack of inclination to finance educational programs that would get to the root of the sociological dilemma that caused poverty.  The incident left some businesses boarded up, but communication between Albina residents and the City of Portland was somewhat improved afterward.

Beginning in the 1960s, the City of Portland, with the cooperation of the Portland Development Commission (PDC) and Emanuel Hospital, began to lay the groundwork for redeveloping the Albina neighborhood by tearing down existing buildings to make room for a hospital expansion. The historically Black neighborhood was labled "blighted" and …