An Oregon Rancher Ordered to Leave 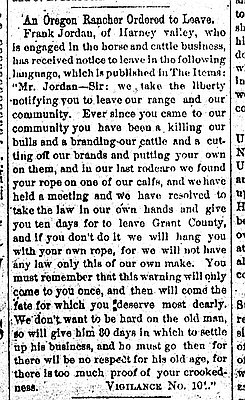 This article appeared in the August 18, 1887, edition of the Boise Idaho Tri-Weekly Statesman. The bulk of the article consists of a letter claiming that Harney County rancher Frank Jordan had been killing and stealing other ranchers' cattle. The writers warn Jordan that if he failed to leave the county, “we will hang you with your own rope.” It is signed, “Vigilance No. 101.” Although the newspapers contain no mention of Jordan being hung, his name does not appear in the 1890 census of Harney County, suggesting that he took heed and left the area.

The vigilance committee’s warnings were not empty promises: Vigilantes were responsible for dozens of killings in Oregon during the last half of the nineteenth century. One study found more than thirty documented cases of hangings conducted by vigilantes along the routes to Oregon and Idaho mines between 1863 and 1865 alone. Many more would follow in the decades to come.

In most cases, vigilance committees were organized by local citizens as a response to unchecked crime in their area. As in the Harney County example cited above, such committees often took shape in isolated communities far beyond the reach of organized government. One newspaper correspondent noted in 1865:

Those counties east of us, sparsely settled, and traversed and cut up by mountain ranges and arid wastes, are the natural haunt of the bandit and thief….The cumbrous and nicely balanced machinery of civil government, which Congress has provided for these Territories, is utterly inadequate to the protection of life and property under such circumstances.

Although often successful in ridding the country of the worst rustlers, thieves, and murderers, Oregonians had mixed opinions about vigilance committees. Some viewed them with scorn. When a murderer known as “Tom the Spaniard” was lynched in the eastern Oregon town of Auburn in 1862, the Oregonian bemoaned the “cruel and barbarous” system of “mob law,” and advised the town’s residents to give “civil law a trial” before resorting to “lynch law.”

Others, however, considered vigilance committees to be “popular tribunals” convened by decent citizens only when absolutely necessary to protect life and property. In October 1887, for example, the Fossil Journal lamented the rustling of livestock in what would later become Wheeler County, suggesting that “it is high time a quietus in the shape of a good hemp rope and a high juniper limb is administered to stop such proceedings.”

In the years following the Civil War, large, open tracts of land became available to Euro Americans as the federal government progressively instituted the long-standing policy of Indian removal, whereby Native groups were …

The portrait above shows Henry Miller (1827-1916), a German immigrant who started off as a butcher in San Francisco and rose to become one of the most successful businessmen in the American West.