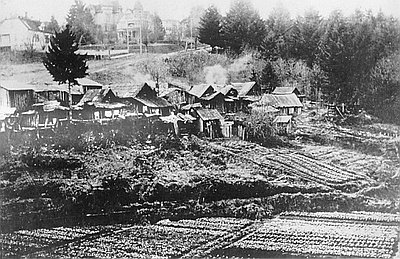 This photograph, dating from circa 1905, features Chinese shanties and vegetable gardens in Portland. The gardens were located on the site of the present-day Multnomah Athletic Club and the Portland Civic Stadium (at SW Salmon and 18th).

The history of Chinese immigration in Portland dates back to the 1850s. Following the Burlingame Treaty of 1868, which allowed free entry for Chinese citizens to the United States, thousands of Chinese immigrants came to the Pacific Northwest seeking employment. Throughout the 19th century, the Chinese were prevalent in mining, railroad building, fishing, salmon canning, construction and small-scale factory production. In the urban areas, Chinese laborers also worked as launderers, gardeners, cooks, and domestic servants. By the latter decades of the century, market-oriented gardening had become an “acceptable” occupation for the the Chinese, and an important element in the Portland economy, including door-to-door sales. In addition to the laboring class, a Chinese immigrant merchant class developed in Portland and other urban areas around the state.

Through the early decades of the 20th century, the social position of the Chinese in Oregon was difficult. By the 1870s, a virulent anti-Chinese sentiment was prevalent across the Pacific Northwest. This anti-Chinese racism stemmed from long-standing beliefs in Anglo-American racial superiority and fears about Chinese immigrants inundating the labor market. Chinese immigrants were legally barred from owning land and their civil rights were severely restricted. As a result of these social and political forces, the Chinese were segregated in a section of Portland that became known as Chinatown. In 1882, the Chinese Exclusion Act barred further immigration by Chinese laborers. Despite these circumstances, the Chinese persevered in Portland, remaining the second largest Chinese community on the West Coast until 1900.  The perseverance of the Chinese immigrants was noted by the Portland business elite who, despite their belief in racial superiority, acknowledged the immigrants’ social and economic impact.

Many hundreds of Chinese immigrants began arriving in Oregon in the mid-1850s.  During these early years of immigration, most male Chinese immigrants, whether they were laborers, merchants, or houseboys, wore a long braid with silk woven into the ends, called a queue.  With time, assimilation to western dress occurred as …

This vendor is probably selling vegetables. Chinese gardeners supplied a large proportion of Portland's residents with fresh vegetables. The vendors carried produce through the streets in large baskets like these, and laundry workers used similar baskets for collection and delivery of clothes and linens.

Employment opportunities were limited for Chinese …